Professor of Art C. Ondine Chavoya has been awarded a 2021 Andy Warhol Foundation Arts Writers Grant. The grants, which range from $15,000 and $50,000, are issued in support of contemporary-art writing and are meant to foster critical writing in relation to the visual arts. 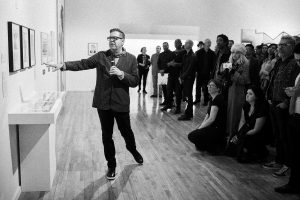 One of 20 writers in this year’s cohort, Chavoya’s writings have been published in numerous journals, exhibition catalogues and edited volumes. The Arts Writers Grant will support his current book project titled Asco: Disgust and Creative Resistance in L.A., which looks at the Chicano artist group Asco. Spanish for nausea, Asco used unannounced street interventions and media hoaxes during the 1970s and ’80s to illustrate the ways in which an aesthetics of protest and disgust could be merged with performance and spectacle.

President of the Andy Warhol Foundation for the Visual Arts Joel Wachs said, “The Arts Writers Grant recognizes the rigorous and generous engagement arts writers have with artists and their work and celebrates their ability to illuminate artistic interventions into the structures that govern our contemporary cultural moment.”