Throughout his multifaceted career as a prizewinning journalist, presidential historian and essayist, Jon Meacham has helped foster a national vision of Americans’ shared history and destiny—one that appeals to our better angels. The former Newsweek editor is the author of an impressive series of respected and bestselling biographies of American leaders, including the late Congressman John Lewis and Presidents George H.W. Bush, Franklin D. Roosevelt and Thomas Jefferson. His biography of President Andrew Jackson, titled American Lion: Andrew Jackson in the White House, was awarded the 2009 Pulitzer Prize for biography, for its “unlikely portrait of a not always admirable democrat, but a pivotal president, written with an agile prose that brings the Jackson saga to life.” A versatile scholar and thinker, Meacham has also explored broad themes in such works as The Soul of America: The Battle for Our Better Angels and American Gospel: God, the Founding Fathers, and the Making of a Nation. He currently serves as the Carolyn T. and Robert M. Rogers Chair in the American Presidency at Vanderbilt University, a contributing writer to The New York Times Book Review and a contributing editor of TIME. He has also written for the Times op-ed page, The Washington Post and Vanity Fair, among other publications, and he has been a regular guest on Morning Joe, the MSNBC daily news and talk program co-hosted by Williams alumna Mika Brzezinski ’89.

Los Angeles native and Jesuit priest Gregory Boyle served as pastor of what was at the time the city’s poorest Catholic parish, Dolores Mission Church, from 1986 to 1992. The parish also had the city’s highest concentration of gang activity. During that time he witnessed the devastating impact of gang violence on his community during the so-called “decade of death,” which began in the late 1980s and peaked at 1,000 gang-related killings in 1992. Father Boyle and his fellow parish and community members took a radical approach by engaging gang members in their own humanization in the face of what they saw as oppressive law enforcement tactics and criminal justice policies. In 1988, Boyle and his colleagues started what would eventually become Homeboy Industries, which employs and trains former gang members in a range of social enterprises and provides critical services to thousands of men and women who walk through its doors every year seeking a better life. Father Boyle is the author of the New York Times-bestseller Tattoos on the Heart: The Power of Boundless Compassion and Barking to the Choir: The Power of Radical Kinship. A recipient of the California Peace Prize, he was inducted into the California Hall of Fame and named a Champion of Change by President Obama in 2014. He has also been honored with the University of Notre Dame’s Laetare Medal, the oldest honor given to American Catholics. Father Boyle also served as a member of California Governor Gavin Newsom’s Economic and Job Recovery Task Force—part of the state’s response to Covid-19.

Debbie Allen is an award-winning actor, director, dancer and choreographer. Her early acting credits include a part in Alex Haley’s epic television miniseries Roots: The Next Generation, followed by a starring role as Anita in a Broadway revival of West Side Story. Her performance in the production earned her a Tony Award nomination and critical acclaim, which led to her role as dance instructor Lydia Grant in the 1980 Academy Award-winning movie Fame. She reprised the role in the musical-drama television series of the same title. She also served as the show’s principal choreographer and won multiple Emmy Awards for her work. Returning to the stage, she headlined in a revival of the musical Sweet Charity, for which she received a Tony nomination. Allen’s directorial credits include A Different World, the popular spinoff of The Cosby Show, and she continued to direct and produce throughout the show’s run. She currently portrays Catherine Fox on Grey’s Anatomy. In 2001, she opened the Debbie Allen Dance Academy, a Los Angeles-based nonprofit dance school for young students. A former member of the President’s Committee on the Arts and Humanities, Allen has received several honors for her work, including an honorary doctorate from the North Carolina School of the Arts, a star on the Hollywood Walk of Fame, and a Lifetime Achievement Award from the American Women in Radio and Television. 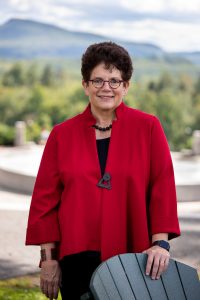 Biddy Martin, president of Amherst College, is a distinguished humanities scholar and leader in higher education. The author of numerous articles and two books (one on Lou Andreas-Salomé, a literary and cultural figure in the Freud circle, and one on gender theory), she is a professor in the departments of German and sexuality, women’s and gender studies at Amherst. A champion of liberal arts education, Martin is a powerful advocate for the expansion of college access through need-based financial aid and an eloquent voice for inclusion and freedom of inquiry and expression. Under her leadership, Amherst College won the Jack Kent Cooke Foundation’s 2016 Cooke Prize for Equity in Educational Excellence in recognition of its extraordinary success in admitting, supporting and graduating low-income students. Before becoming Amherst’s 19th president in 2011, Martin spent over two decades at Cornell University teaching and eventually serving as provost. After Cornell, as chancellor at the University of Wisconsin-Madison, she led successful initiatives to increase need-based financial aid, improve undergraduate education and enhance research. Martin is a first-generation college graduate. She majored in English at the College of William and Mary and subsequently earned an M.A. in German literature from Middlebury College’s program in Mainz, Germany, and a Ph.D. in German literature from the University of Wisconsin-Madison. She is a member of the American Academy of Arts and Sciences and holds several honorary degrees. In 2018, Martin was elected to the Harvard Corporation, a governing board of Harvard University.

Betty Reid Soskin is a civil rights advocate and recently retired ranger with the National Park Service’s Rosie the Riveter/World War II Home Front National Historical Park in Richmond, Calif., which honors the contributions women made to the war effort. Throughout her life, Soskin has fought against racism and discrimination. In 1945 she co-founded Reid’s Records in Berkeley, Calif. One of the first Black-owned record shops in California, Reid’s was dedicated to supporting African American music and became especially influential in supporting gospel musicians. Soskin eventually took over management of the store, which led to her becoming engaged in area civic matters and a prominent community activist as well as a songwriter in the civil rights movement. She also became involved in the Mount Diablo Unitarian Universalist Church and the Black Caucus of the Unitarian Universalist Association. Soskin later served as a field representative for California State Assembly members Dion Aroner and Loni Hancock, becoming active in the early planning stages and development of the national park where she currently works. At age 100, she is the oldest National Park Ranger serving the U.S. In addition to conducting park tours, she is an interpreter, explaining the park’s purpose, history, various sites and museum collections to visitors. She is also celebrated for raising awareness of the African American wartime experience in the park’s history. In 2018, she released a memoir, Sign My Name to Freedom, chronicling her life’s journey through American history.