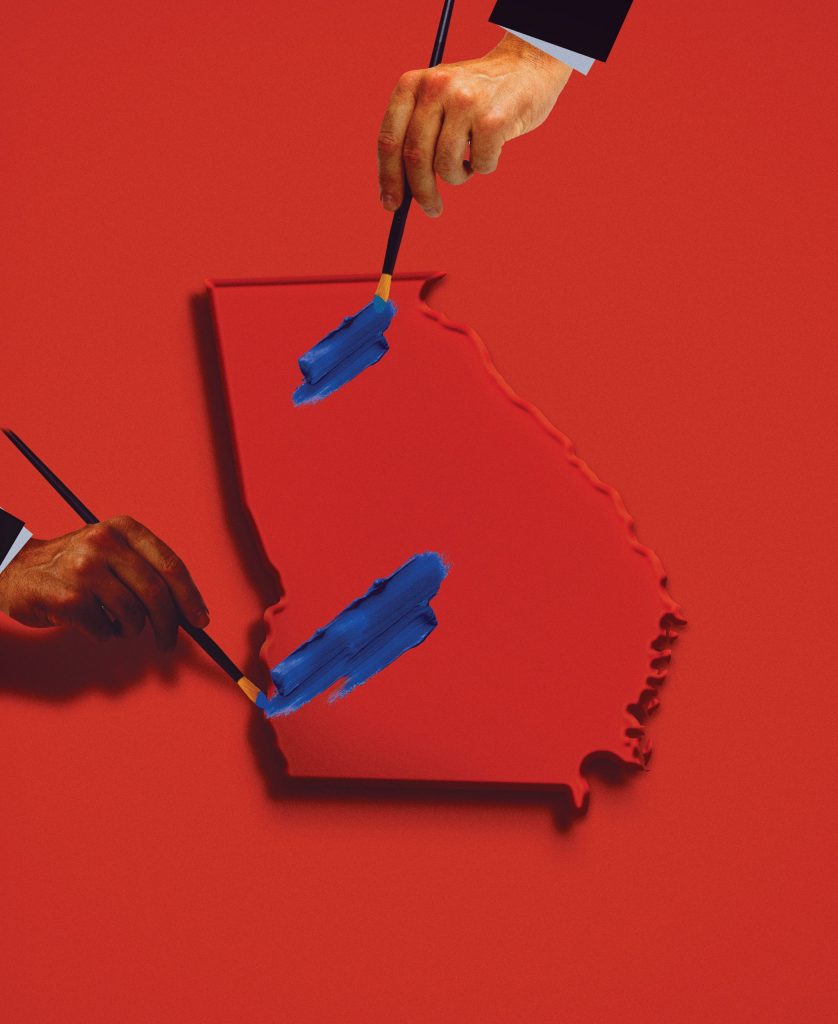 A Williams historian reflects on the arc of history that led to the election of Raphael Warnock and Jon Ossoff as the first Black and first Jewish U.S. senators from Georgia.

In the early morning hours of April 27, 1913, Newt Lee, a Black night watchman, discovered 13-year-old Mary Phagan’s battered and sawdust-covered body next to the incinerator in the basement of the National Pencil Co. Phagan had gone to the factory the previous day to claim her final pay after she was laid off five days earlier. She never returned home.

The autopsy on the young white girl revealed death by strangulation. While rape was never confirmed, there was evidence of extreme genital violence that explained the condition of her blood-soaked underwear. The rest of Phagan’s body was equally bloodied and bruised. A blood-spattered strip torn from the petticoat of her dress was wrapped around her neck, where a seven-foot cord tied into a slipknot also remained cinched. The entire front of her body was caked with dirt and covered in scratches, giving the appearance that she had been dragged by the ankles face down. Her arms were crossed reverently over her chest, giving detectives the impression that whoever had dumped her body felt at least some sympathy for her.

No compassion was shown toward Leo Frank, the Jewish factory manager who was charged with Phagan’s murder. Frank, who had just completed a term as president of the Atlanta Chapter of B’nai B’rith, was alleged to have been the last person to see Phagan alive. Police also believed that Frank behaved suspiciously and attempted to implicate Lee, the night watchman, in the grisly murder. To use law enforcement rhetoric, Frank exhibited “guilty behavior.”

Presuming Frank to be the culprit, Georgia Solicitor General Hugh Dorsey pursued a speedy court case against him that pivoted around circumstantial evidence. The state relied heavily on the wildly inconsistent testimony of Jim Conley, a Black janitor at the factory who at one point claimed that Frank enlisted him as an accessory after the fact to help move Phagan’s body to the basement, where it was destined for the incinerator. Conley, who changed his story several times, also alleged that Frank promised him $200 to cremate the body but withheld the money when Conley refused.

Although Conley changed his story several times, Dorsey, in a paradoxical twist of racial fate, eagerly accepted his accusation that Frank murdered the teenage girl. (Other observers felt strongly that the janitor had acted alone in committing the crime.) In Dorsey’s view, Frank was more than a murderer.

Dorsey painted a picture of the factory superintendent as a homosexual and sexual pervert who preyed on young girls. Factory employees offered false testimony that Frank had made sexual advances toward them. Dorsey also presented the evidence of a madam at a nearby sex house who alleged that Frank had phoned her several times, seeking a room for himself and a young girl. In an era where it was a “hanging crime” for Black men to have any sexual contact with white women, this racial diktat was swiftly applied to Frank, a Jew. On Aug. 25, 1913, he was found guilty of murdering Phagan. It had taken the jury less than four hours to reach a verdict. Frank was sentenced to death by hanging—certainly satisfying to the crowd that had gathered outside the courthouse each day, shouting, “Hang the Jew.”

For nearly two years, Frank exhausted every legal possibility in an attempt to overturn his conviction. In spite of the many breaches of due process, Georgia’s higher courts rejected his appeals, and the U.S. Supreme Court voted 7-2 against reopening the case. However, on June 21, 1915, Gov. John Slaton commuted Frank’s sentence from capital punishment to life imprisonment, an act that prompted Tom Watson, a Democratic populist who penned several anti-Semitic essays scrutinizing the case in The Jeffersonian and Watson’s Magazine, to advocate for Frank to be lynched. Years later, the historian C. Vann Woodward explained that the influential Watson, through his writings, had “pulled all the stops: Southern chivalry, sectional animus, rape prejudice, class consciousness, agrarian resentment, state pride.” Watson’s work had been enough to cause wary Jewish families to flee Atlanta.

Watson’s essays also incited a prominent group of armed vigilantes who had been outraged by Slaton’s commutation to carry out Frank’s extrajudicial killing. The group of nearly 30 men included Joseph Mackey Brown, the former governor of Georgia; Eugene Herbert Clay, the former mayor of Marietta and later president of the Georgia Senate; E.P. Dobbs, the then mayor of Marietta; and Moultrie McKinley Sessions, a banker and lawyer. Several current and former Cobb County sheriffs also participated. On the night of Aug. 16, 1915, the group, self-dubbed the “Knights of Mary Phagan,” abducted Frank from the prison in Milledgeville and drove him more than 100 miles to Marietta, Ga., where the slain girl had lived. Early the next morning, Frank was hanged with his body facing the direction of Phagan’s house. Frank became possibly the rarest fruit that an oak tree in Georgia had ever borne. He was one of just a few known persons of Jewish descent in American history to be lynched.*

A crowd of men, women and children witnessed the callous spectacle, and souvenir hunters cut away parts of Frank’s clothing. One onlooker, Robert Lee Howell, wanted to cut up pieces of Frank’s body and have them burned. But a local magistrate took a vote whereby those present agreed to have the body returned to Frank’s family intact. Howell, irate, stomped Frank’s chest and face after the body was cut down. Despite promises to punish those responsible, no person was ever charged, and the Atlanta Jewry has still not fully recovered from the trauma of the lynching of Leo Frank.

Instead, Frank’s lynching helped to revive the Ku Klux Klan, which in its second manifestation targeted Catholics, immigrants and Jews alongside African Americans. This cruel renaissance coincided with D.W. Griffith’s controversial silent film The Birth of a Nation, which premiered in 1915. Inspired by Thomas Dixon Jr.’s novel The Clansman, the film portrayed African Americans as sexually wanton and stupid, with Black men especially depicted as lustful toward white women. The film praised the Klan for rescuing white women from the savage and sex-crazed Black man, in the very same manner that the “Knights of Mary Phagan” had avenged her murder by Frank.

Whereas the Klan’s racist aggression did not lead to an overthrow of any government, its acts of barbarity, coupled with the compromises and ineffectuality of Republican leaders, led to African Americans being disenfranchised, just as their political aspirations were also curtailed. Outnumbered and outgunned, Black people in most areas did not retaliate against the Klan, and the old Southern, white supremacist order was eventually restored.

The political fallout was predictable. In the period of Reconstruction, 1,465 African Americans held office, including two Black U.S. senators, both from Mississippi—Hiram Revels and Blanche K. Bruce. After Bruce’s term ended in 1881, amid increasing disenfranchisement and racial segregation, it took 132 years for another Black senator, Tim Scott, to be elected to the U.S. Senate from the South. In the same time period, only two Jewish senators were elected from the South, although it is worth mentioning that Benjamin F. Jonas of Louisiana was already serving in office prior to the end of Bruce’s tenure. The second, Richard Stone of Florida, was elected 90 years later, in 1975. The same Klan violence that was inflicted on African Americans throughout the South, and that resulted in Frank’s lynching, ushered in an uninterrupted period of anti-Black and anti-Semitic Southern white intolerance that curtailed Black and Jewish political aspirations—especially the hopes of those seeking a seat in the U.S. Senate.

This prejudice has been notably acute in the state of Georgia. Neither an African American nor a Jewish senator had ever been elected to the Senate from the Peach State.** I found myself reflecting on this arc of history in the wake of the twin victories by Raphael Warnock and Jon Ossoff, who each won runoff elections in Georgia in January 2021, catapulting them to the U.S. Senate. The historic nature of their triumphs flatters more than our typical enthusiasm for notable firsts. Their successes evoked the history of Black activism and the enduring freedom struggle that African Americans have waged to challenge white supremacy. Warnock and Ossoff also overcame the long history of racial hierarchy, Southern resistance and voting suppression that have incapacitated the political interests of other Black and Jewish Georgians hoping to be elected to Congress.

Warnock and Ossoff won just as the sitting president, Donald J. Trump, and others were vigorously engaged in attempts to overturn the results of the 2020 U.S. presidential election by delegitimizing the largely Black vote in the State of Georgia that propelled Joseph Biden and Kamala Harris (the first African American, South Asian American and female vice president) to a decisive electoral win. Ironically, those delegitimizing efforts culminated in a Klan-like, insurrectionist attack by a Confederate-flag-carrying mob on the U.S. Capitol on Jan. 6, 2021, the day that Congress gathered to formalize Biden’s and Harris’ victory—and only a day after the Georgia runoff elections were held.

Their victories were even more impressive if only because most political observers did not expect them, even after Biden and Harris carried the state in the presidential election. At best, the hopes were that one of the senatorial aspirants, amid the indefatigable work of Stacey Abrams and her nonprofit, Fair Fight Action, to contest inequitable voting practices and to encourage voter turnout during an ongoing pandemic, might prevail, splitting Georgia’s two senate seats. Thus, the stunning sweep by Warnock and Ossoff reverberated politically. In the process, their electoral feats turned a blood-stained, red Georgia—where politics have been intertwined with the maltreatment of Black and Jewish people—blue.

This shocking outcome was captured by Saturday Night Live in an ironic and timely parody called “Blue Georgia” that nods to the anti-liberal politics that have permeated the state’s history since the time of Reconstruction. As restaurant patrons dine on gluten-free avocado toast, a character named Biscuit, played by cast member and Georgia native Kenan Thompson, reads Michelle Obama’s Becoming, or, as he refers to it, “the good book.” The most fitting line in the skit comes when one character, Lee, announces that he is Jewish, to which another character, Skeeter, hurriedly asks, “You know what we do to Jewish people down here? We elect them!”

Sure, in 2021. Demographic shifts have opened the door for such possibilities. But in 1915, a Jew could be lynched in Georgia, just as Leo Frank was—a grim fate even more customary in the lives of African Americans, from the end of the Civil War through the modern-day lynching of Ahmaud Arbery just 11 months before the unlikely election of Warnock and Ossoff. The two Georgians, who often campaigned together, are now Democratic allies in the U.S. Senate. But as the first Black man and first Jewish man to be elected to the U.S. Senate from the State of Georgia, the disenfranchisement, discrimination and deadly violence experienced by their forebears bind them to a more peculiar kinship.

*The historical record on Jewish lynchings remains incomplete. It is believed that a Jewish writer, Albert Bettelheim, was lynched in Georgia on Aug. 15, 1915, two days before Frank was hanged. Nearly 50 years later, Jewish civil rights workers Michael Schwerner and Andrew Goodman, along with James Chaney, an African American, were lynched by a murderous Klan squad that had beaten, burned and buried them in Neshoba County, Miss.

**It is worth noting that after Jefferson Long served in the U.S. House from 1869 to 1871, 102 years passed before another Black representative was chosen from the state; in total, only 11 African Americans have shared the honor. Only one Jewish politician, Elliot Levitas, has been elected to the U.S. House from Georgia.

From the editor: This story has been updated from the printed version to reflect that Georgia elected one Jewish politician to serve in Congress prior to the election of Jon Osoff to the U.S. Senate in 2021.