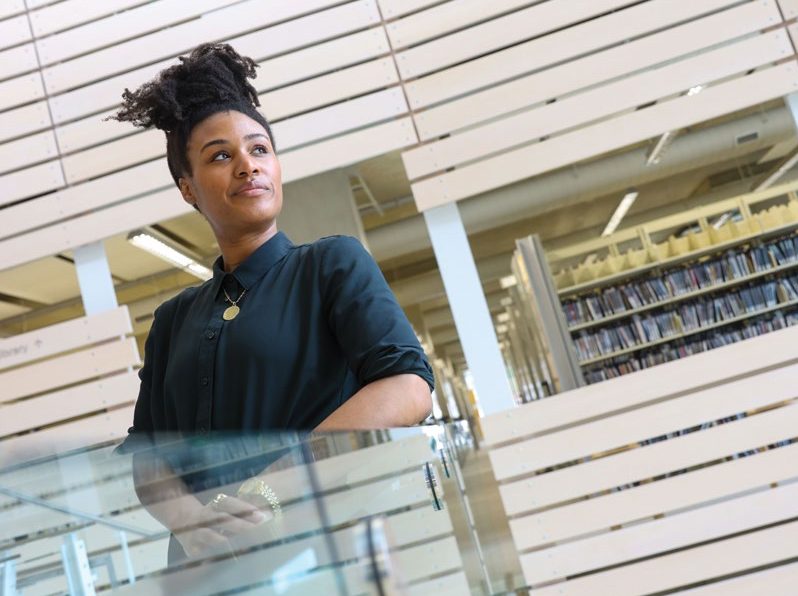 Africa and the Anthropocene

Brittany Meché, assistant professor of environmental studies, and her students delve into historical injustices that continue to shape the landscape of the African continent.

“What does it mean to act ethically in a world that is so unequal?”

It’s a question environmental studies professor Brittany Meché examines with her students in the spring-semester course Africa and the Anthropocene.

The class explores what Meché calls a “frustrating paradox”: The African continent accounts for the smallest share of global greenhouse gases, yet it is predicted to experience some of the worst effects of climate change. Untangling the roots of this imbalance, she says, requires recognizing the “living history” of centuries-old injustices.

“You can’t understand the contemporary environmental landscape of the African continent without understanding colonialism and the transatlantic slave trade,” Meché says.

Her multidisciplinary course—which is cross-listed with programs in Africana studies, environmental studies, and science and technology studies—engages with a broad swath of material, including theoretical texts, reports from international organizations, films and novels. So it’s not surprising that Africa and the Anthropocene draws students from a wide range of interests and majors.

Meché recalls a recent discussion of the book A Billion Black Anthropocenes or None by Kathryn Yusoff, professor of inhuman geography at Queen Mary University of London. The book, published in 2018 by the University of Minnesota Press, unpacks Yusoff’s statement that “no geology is neutral” by weaving together Black feminist theory, geography and the earth sciences.

“We had one student who was very interested in geosciences and had always thought of geology as value neutral,” Meché says. “After reading the book, he was thinking about it in a new way.”

Another student, Liv Chambers ’25, was interested in analyzing the poetry included in Yusoff’s book written by Amié Césaire of Martinique, whose work explores Black identity under French colonial rule. “Césaire’s poetry provided grounding in the current moment of global environmental precarity and reaffirmed our hopeful work toward creating a new, environmentally just world,” says Chambers, who plans to major in history and geosciences.

Adds art major Calen Geiser-Cseh ’23, “Our discussion of [Césaire’s] poetry opened an imaginative avenue to think about possibilities for the future beyond words on a page.”

Meché says these kinds of discussions and discoveries are “the best of what a liberal arts conversation can offer—to have all these people in the same room reading the same text and drawing very different things from it. That’s when the magic is happening.”

Meché came to Williams in the fall of 2019 as a Gaius Charles Bolin Fellow. The two-year residential fellowship, named for Williams’ first Black graduate, provides resources for scholars from underrepresented groups to finish their dissertations and teach a course. That’s when Meché introduced Africa and the Anthropocene. She joined the environmental studies faculty last fall and also teaches Science and Militarism in the Modern World, Global Sustainable Development and the senior seminar Environmental Ethnography.

At the root of all her research and teaching is a focus on ethics. Says Meché, “Fundamentally, I want students to leave this course with a sense that people are attempting to act in the world in ethical ways—that people are still attempting to effect change, even amid some of the most dire circumstances.”