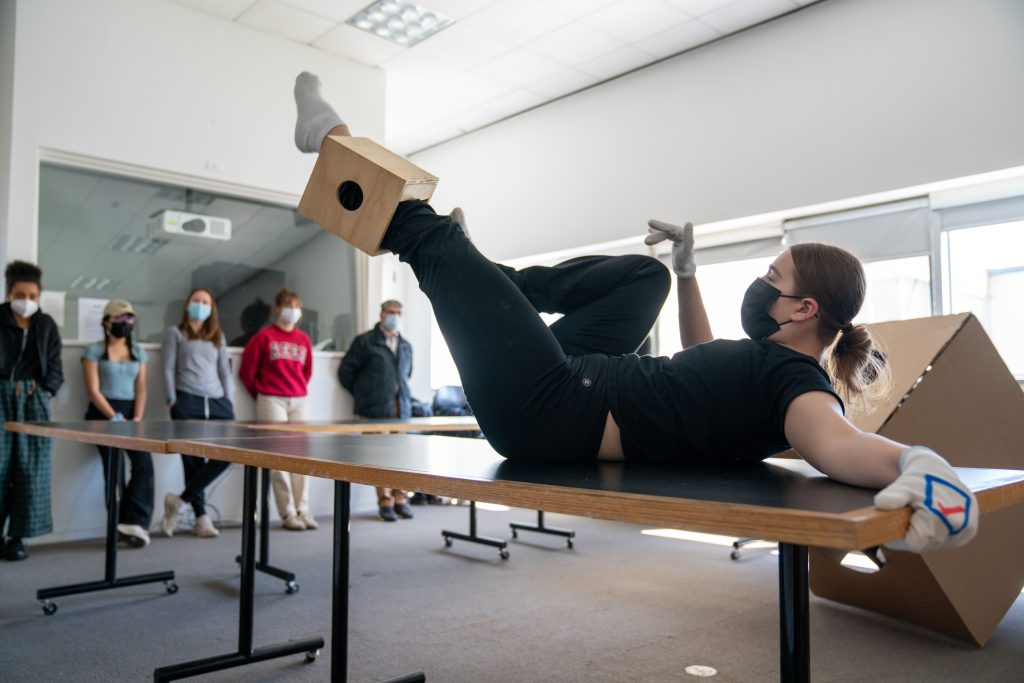 A new course in the performing and visual arts teaches students to focus on creativity and imagination as much as—if not more than—the finished product.

“There was clay on the floor, glitter on the walls.”

What sounds like a description of Studio 54 in the days of Andy Warhol is in fact theater professor Shanti Pillai recalling the condition of Room 222 in the W.L.S. Spencer Studio Art Building one day last spring. Her students had taken over the so-called “flex space” as part of her new course Living Things: Bodies and Objects in Sculpture and Performance, which Pillai is teaching again this spring.

Alternating between Spencer and the ’62 Center for Theatre and Dance’s Directing Studio, students engaged in “art making that transgresses the boundaries between the visual and performing arts to see a life that animates both bodies and objects,” according to the course description. In the ’62 Center, students did physical work, such as a series of exercises drawn from yoga, to “activate the psychophysical capacities for exploration and to [allow] the body to be an active agent in a creative process,” Pillai says. In Spencer, they created objects that they would then “enliven through performance,” she says.

Pillai gave weekly performance assignments called Études, where students gathered in groups with different collaborators and quickly had to make something and then present it. The prompts were varied: one week, to perform a one-minute valentine; another, to create something using a costume piece pulled from a box. 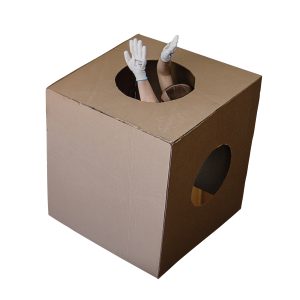 At the end of the semester, the class, which included a balance of theater and studio art students with different backgrounds and artistic reference points, participated in the studio art department’s final art show in Spencer, where they shared presentations of their work.

“The spatial structure of the class mirrored the multidisciplinarity of its curriculum,” says Pillai, whose own work as an artist, scholar and writer is varied and multidisciplinary. In addition to receiving a Fulbright Research Award in 2017 for a project about women artists’ contributions to contemporary performance across genres in India, she has performed with Frente de Danza Independiente, an artistic association in Ecuador, and has created and performed original pieces with collaborators in Cuba. In October she performed a work-in-progress, To the Academy, which she created with actor Marc Gomes and a team of design collaborators, as part of an artist series hosted by The Clark and the Williams Grad Art program.

Teaching is an important part of Pillai’s own artistic practice. In Living Things, Pillai encouraged her students to prioritize cultivating their creativity and imaginations over making polished, finished or familiar products. “The arts are about launching into something where there’s not necessarily an end goal, where there’s no clear right and wrong answer, where there’s no immediate solution,” she says. “You discover things. You’re in full-on investigative mode.”

Obi Nwako ’24, a theater major from the Bronx, N.Y., says that during the weekly Études, he didn’t have time to be picky with the ideas that came to mind. “I had to stick with either my first or second idea, even if it seemed crazy, and find a way to make it work,” he says. “I appreciated being put in these situations, because following these inspirations created the mindset for me that there is a way to create the things you want to make. You just have to have the rigor and the creativity to see it through.”

Pillai wants her students to know that she, too, is always exploring and trying to figure out the unknown. So this spring’s version of the class promises to be something new—in part because she will co-teach the class with Williams’ Arthur Levitt Jr. ’52 Artist-in-Residence Sean Devare. Devare is a New York-based multidisciplinary theater artist and designer whose work examines “the complexities and contradictions of assimilation in the first (and second) generation American experience,” according to his website.

“The fact that two teachers are also collaborating with one another in a live creative process in front of the students is going to give a different kind of course and a different kind of dynamism to the instruction,” Pillai says. “It’s really important that I keep that flame alive in myself, and that’s what I wish to share with the students.”

Above: Alex Bernstein ’23 participates in a group work-in-progress during a visit last spring from dramaturge/scholar Rustom Bharucha from India.