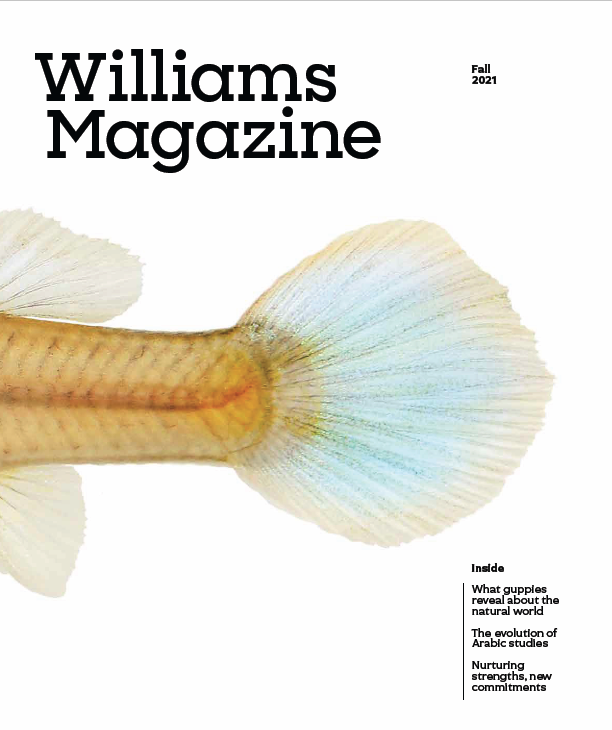 I read with great interest the article “Arabic, Studied” in the [fall 2021] Williams Magazine, but was perplexed that the author stated, “Institutional memory effectively places the birth of Williams’ Middle Eastern Studies program at 2003…”

In fact, Williams’s institutional memory should stretch back at least another two decades. I took a Critical Languages Arabic class in the Fall of 1982 in advance of taking part as one of the twelve original participants in the Williams-in-Cairo program in 1983-84. This pioneering year-abroad program was developed by visionary Gaudino Scholar and political science professor Raymond Baker, who had developed strong relationships with the American University in Cairo (AUC) over many years.

The program at AUC involved taking graduate courses on Arabic language, Arab society, politics, and culture, and Islamic art and law, along with an independent study of our choice. But—as Professor Baker knew would happen—my most significant education came from the city of Cairo itself – umma dunya (Mother of the World).

I wandered in random directions in order to get lost and find my way back, always encountering amazing people and places along the way, blowing my 20-year-old mind wide open. I spent hours each day with an egg seller in the main downtown food marketplace, Suq Bab el-Louq, acquiring a thick Egyptian accent as I gained friends and a deep understanding of life on the streets. I published a book of photos and stories from the marketplace in order to demystify working-class Cairo for western audiences; you can view it at TalesFromTheSuq.com.

This Williams-in-Cairo program not only enabled me to access in-depth knowledge of a critical part of the globe, it transformed my life over the course of a year. I owe a great debt to Professor Baker and the Williams administrators who supported his work supporting students like me in our development as citizens of the world. This program should not be forgotten.

I was graduated from Williams in 1989. I submitted my senior honors thesis to the African and Middle Eastern Studies program at that time. As my interest was in African Studies I did not take any courses in the Middle East but I vividly remember others who did, often focusing their attention on Israel.

I suspect a review of course catalogs from before 1989 would demonstrate that Middle Eastern studies at Williams had been active for many years prior.

I want to thank you for the excellent article (“Good Timing“) and tell you that in 1961-1962 I too had a Williams College sponsored junior year abroad experience that was a great joy and also had an amazing maturing effect on me and enhanced my eventual career. I was a yearlong student at the University of Ghana, West Africa.

I was brought up in a family that encouraged international education experiences. I had a particular personal reason for wanting to live a while in Ghana. During high school a visiting student from Ghana lived with us for a few months. Nii and I became (and still are) very close friends. I thought that we could spend a lot of time visiting highlife beer clubs (amongst other “educational” experiences) if I managed to come to Ghana. During my sophomore Williams year the College advertised a new African study abroad experience mainly for students interested in third world political science and economics. I immediately applied although my major (biology) was not in line with the program’s stated goals. Imagine my (and my parents’) surprise when I was selected! The political science and economics departments had not wrapped their hands around the program and/or the other applicants were not as eligible. I was a year ahead in my major and the Biology Department was enthusiastic (as long as Organic Chemistry would be one of my courses).

Nii was not in Ghana (he was starting his studies at McGill), but his family met me at the airport, took me to their home for a blessing (gin sprinkled on the floor and in shots) and took me to lunch at a YWCA. I expected a mild dish but was suddenly awakened by stew that was well laced with cayenne pepper–a precursor to many meals to come. Then we went to the university, which was modeled after British universities. I was a member of a “college,” and like other students, had a single room and was served meals at a dining room with a high table for faculty.

I was a student in an outstanding lecture and laboratory course in mechanistic organic chemistry (the Ghanaian professors had received their Ph.D.s at Oxford or Cambridge), a great political science course and a not so good comparative religion course. I helped another student on reptile collecting trips and during class breaks I visited Burkena Faso, Mali, Niger, Togo, Dahomey and Nigeria–all amazing experiences.

How did the experience change me forever? Well, I was one of 20 “white” students amongst 800 African students. The African students could easily have attended Williams. They had secondary educations at elite schools, were at least bilingual, and were ambitious and fun colleagues. My best friend was a physics major from Togo who went on to earn a Ph.D. from Oregon State. One telling experience happened while shaving when I looked in the mirror and realized by surprise that I was not black. I loved going to open air markets (you could buy almost anything), villages with my student friends and talking drum concerts.

The professional help was a bit surprising. What I needed for the future was three things–the mechanistic organic chemistry, attending a seminar presented by a future Nobel Prize winner (Dorothy Crowfoot Hodgkin, wife of the political science professor) on macromolecular structural biochemistry, and choosing against field work.

Several years later I was invited back to the University of Ghana as a visiting professor in Biochemistry. Despite the very limited instrument and reagent resources, the faculty and students were excellent.  The university had expanded from 800 to 30,000 students and as a result did not have the previous luxurious atmosphere.

I will never forget my junior year experience.  It changed my life.

Deep in the Game