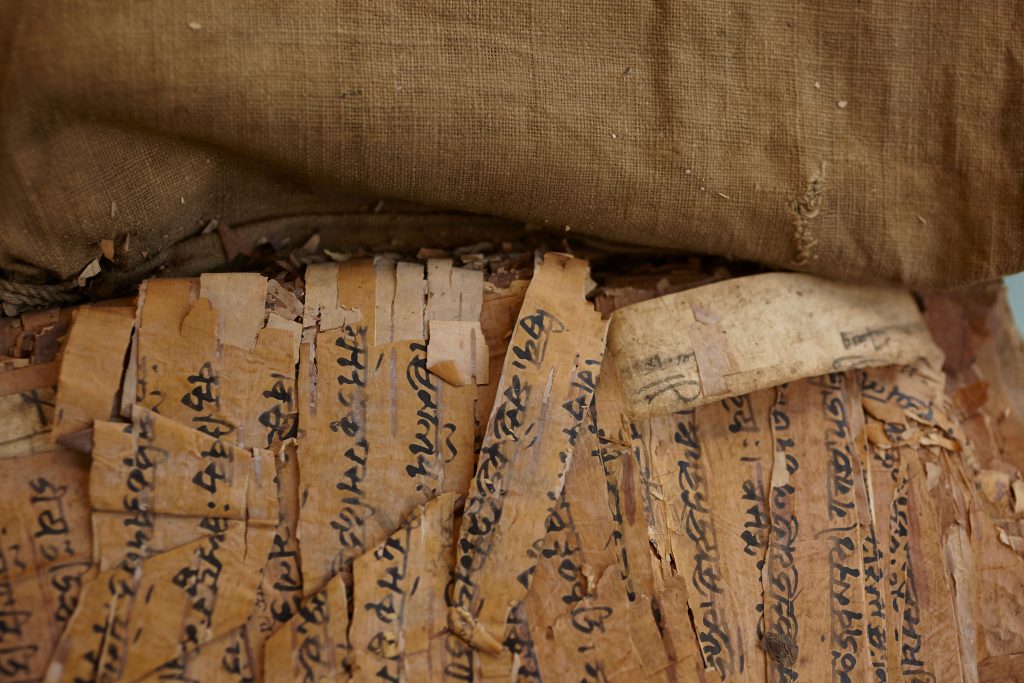 After a lengthy journey to conserve and digitize it, a fragile, rare birch bark manuscript is now part of Williams’ collections.

In 2019, Candida and David Low ’69 discovered a fragile, disintegrating book made of birch bark in storage at their home in Pownal, Vt. The house had been in the family for multiple generations, and while the Lows knew little about the manuscript and its origins, they recognized it as a valuable object.

They decided to donate the manuscript—in memory of Candida’s father, Frank L. Connard, Class of 1929—to Williams College’s rare book collections at the Chapin Library with the idea that it could be preserved and used for teaching and research.

“We discovered it in the basement, wrapped up in aluminum foil,” Candida Low says. “I didn’t want to see it sitting there, not being used. I wanted to see researchers enjoy it and learn from it.”

The library followed through on that promise, and the manuscript has since become the subject of an international research project connecting scientists, conservators and scholars. Today Williams students can study the text and structure of an object rarely found in North American collections.

When the manuscript arrived on the desk of Anne Peale, Chapin librarian, for cataloging, a Google search showed it likely originated in Kashmir. Scholars at the University of Oxford confirmed her initial impression. They also identified the volume as a Sanskrit grammatical text written in Śāradā script. But the manuscript was too fragile for further exploration.

“Every time we opened the pages,” Peale says, “we were afraid one of the loose sections would catch and cause further damage.” 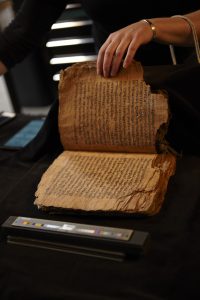 Library staff wanted to conserve the manuscript while also allowing for further study. Bexx Caswell-Olson, director of book conservation, and Mary Hamilton French, associate book conservator at the time, at the Northeast Document Conservation Center (NEDCC) in Andover, Mass., knew what to do.

When the manuscript arrived at the NEDCC, conservators found the multi-layered birchbark had delaminated. There were cracks and splits, and pages were tangled. It took the NEDCC team about 520 hours to reach a point where the pages could be turned and further research could proceed.

Along the way, they found that a number of fragments couldn’t be placed. Sloane Geddes, a doctoral candidate at the University of Toronto, helped the NEDCC restore some of the fragments to their original positions. She also identified the book as the first volume of the Bālabodhinī, a grammatical text by the author Jagaddhara, a 14th-century Kashmiri scholar.

At the same time, Peale connected with a project called The Book and the Silk Roads at the University of Toronto. The Mellon Foundation-funded project leverages a network of scholars, scientists, curators, conservators, librarians and community members to study how books have developed and moved around the world through time.

Their network of researchers used microCT, an X-ray imaging technique, to peek inside the fragile book. Through carbon dating, they determined that the manuscript was constructed between 1500 and 1640. They also created a 3D model of the interior.

“The scan allowed the conservators to see features inside the book before they tried to work on it, including huge cracks running along the book block as well tiny features like broken pages and fragments, the grain of the wood and bark, and the sewing that held the book together,” says Jessica Lockhart, head of research at the University of Toronto’s Old Books New Science Lab. “This record will allow other scholars, librarians and caretakers to better understand similar manuscripts that may be in their collections.”

After a lengthy journey, the birchbark manuscript returned to Williams over the summer. Every page and fragment has been digitized and is available to interested researchers.

One of the next to study the manuscript could be a Williams undergraduate. Peale and Murad Mumtaz, assistant professor of art, are teaching The Arts of the Book in Asia this spring. The class will culminate in an exhibition featuring objects from the library’s collections and student research on production processes, from paper and ink to design and illumination elements.

“They get in touch with scholars from other universities across the globe,” says Mumtaz, describing students from prior classes. “They do serious in-depth research, and we end up finding out so much about these manuscripts that we might not have known.”

Mumtaz and Peale say the ability to work with these objects in person, in the library, is helpful for students—especially for a book like the Kashmiri manuscript.

“It’s an incredibly rare item that represents a piece of global book history that is so rarely accessible to students in an American institution,” Peale says. “To have it physically present at Williams is a huge gift.”