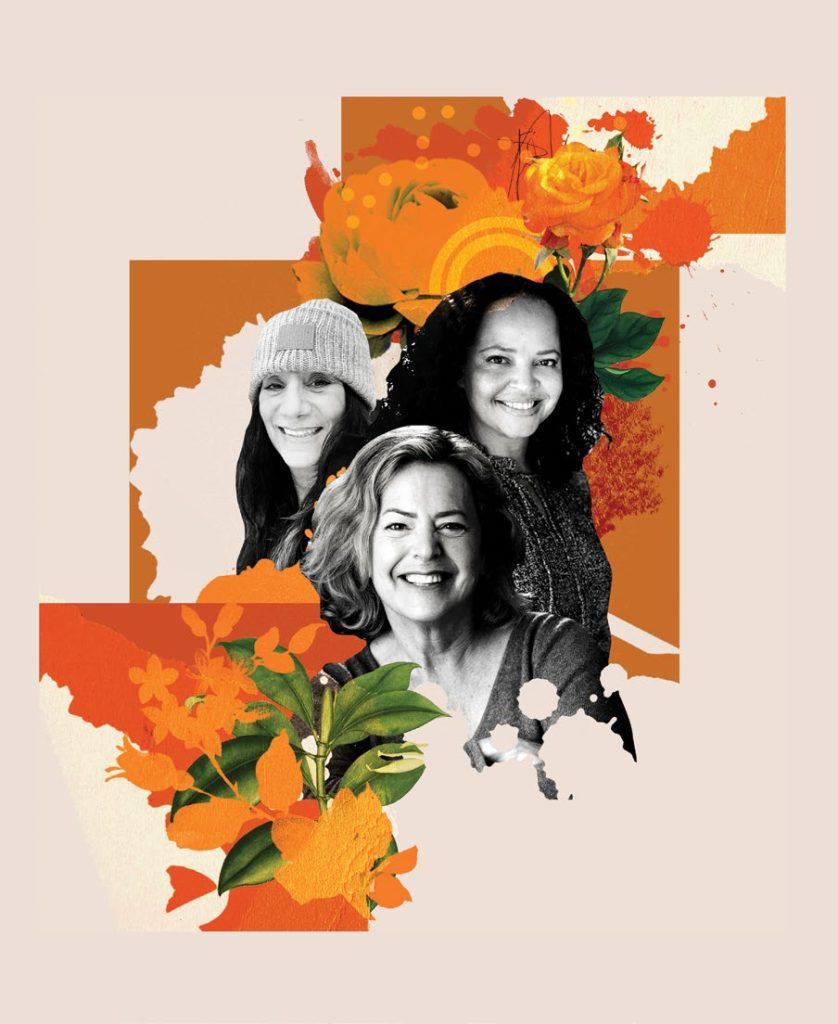 How personal experiences with cancer propelled three alumnae to share their knowledge and support with others.

Ask Louisa Gloger what year she graduated from Williams, and she says that’s where her breast cancer toggles between 2000 and 2001. She PURPOSE & story begins.

As a 19-year-old, she took a year off from college when her mother was diagnosed with the disease for a second time. She passed away before Gloger graduated.

Then, at the age of 31, after her second daughter was born, Gloger found a lump in her own breast. She was diagnosed with triple negative breast cancer, a disease that disproportionately affects Black and Latina women. Gloger recalls telling her doctor, “I’m super scared that I’m not going to make it,” to which her doctor replied, “Louisa, the thing is, you will make it. But a large part of this is a socioeconomic difference.”

“That was a catalyst moment for me,” Gloger told some 60 Williams alumnae during a panel discussion about passion philanthropy—the practice of committing time, money and other resources to causes that align with one’s most important beliefs and values. In Gloger’s case, and that of fellow participants Rebekah Timin Mannix ’90 and Wendy Brown ’82, that cause was cancer.

Gloger went on to co-found Triple Step Toward the Cure, an organization that provides financial and emotional support to women going through treatment. Brown, whose mother died from breast cancer and who survived it twice herself, established the Twinkle Foundation, which works closely with the Silent Spring Institute and Breast Cancer Prevention Partners, supporting and sharing research on the links between breast cancer and the environment. And Mannix, with her husband, Jim Mannix ’89, who was diagnosed with metastatic pancreatic cancer 12 years ago, launched the Treat Train, a colorful, cheerful cart that delivers crafts and treats to pediatric cancer patients at Boston Children’s Hospital.

“There are many ways that our family for the last 12 years has been swallowed up by grief and fear,” said Mannix, who led the online discussion, an excerpt of which follows. “But slowly we’ve crawled out bit by bit. That involved reaching out to others and asking how we can support other people.”

Rebekah Timin Mannix ’90: Passion philanthropy is not just a generous gift. It’s a selfish gift to think about how to transform these horrible experiences into something more meaningful. I have two amazing women who are going to join me in this conversation. I thought we could start by hearing a little bit about your stories.

Wendy Brown ’82: My mom and I didn’t fit the profile of people who should be at high risk for breast cancer. And not just the two of us—friends and mothers of friends of mine were also being diagnosed. That’s what really irritated me at the time. I wanted to know why. Why me? I was zoning in on the environmental link, did a lot of research. And then my mother’s funeral came around, and I decided to start a family foundation called the Twinkle Foundation, because people really wanted to give money to something. What we found at the time was that almost all the money going into breast cancer was going into diagnosis and research. Hardly anybody was focused on prevention of a disease that one out of every seven women is going to have at some point in their life. So that’s what we’ve been maniacally focused on, specifically with respect to environmental links. I call what I do “philanthropy light.” It’s never been my full life. It’s been an outlet, a way of being positive and educating myself as well as feeling as though I can move this ball forward, somehow, just one little person in the world. And so my foundation was never big. It was always just me, my family cheering me on. Here I am, 15 years into it. It helped me during my diagnosis tremendously. I had new contacts, I had a lot more information. I felt much more empowered. And I think for anyone who’s been through cancer, that’s half the battle—feeling positive and like you are in control of something. Because when something else takes control of your body, it’s very easy to believe that you have no control.

Louisa Gloger ’00: As I was going through treatment, it struck me that I would often find myself in waiting rooms with other young, Black women who were trying to parent and raise children, struggling with getting there on the bus—struggling with just surviving in the world—in addition to having cancer. I had the resources to get to my appointments, to hire a full-time nanny to take care of my two young children. I had the educational background to advocate for myself. I had this moment of realization that this was unacceptable to me. I teamed up with my doctor at Stanford, and she connected me with a woman who lost her sister to triple negative breast cancer the year before. And this woman, Lori Flowers, and I founded a nonprofit, Triple Step Toward the Cure, in 2010, while I was still in active treatment. We hit the ground running. We set up a 501(c)(3). I would go from my chemotherapy appointments to lawyer appointments to do the paperwork and get it going. It was pretty epic. And I think, selfishly, in a way, helping other women helped me. We fundraised extensively, raised $250,000 through friends and family and grassroots $5 donations—everything from selling little pins to taking checks from big donors. I ran that organization with my co-founder for about five years. Then my story shifts. I was an art history major at Williams, and art is my first love. I realized that for myself, for my survival, I was not trained as a therapist or a social worker. Taking calls from women who were going through treatment started to be too much for me. So I stepped away from Triple Step, but I joined the board of the Cancer Prevention Institute of California. I’ll tie in here that art is a massive philanthropic aspect, because I believe art is very healing. I’ve just started a new job as executive director of the Bolinas Museum, and I continue to support women with breast cancer.

Mannix: What are you most proud of?

Brown: For me, the idea of going out and fundraising was never part of it. I was working full time, moved to Germany in the middle of it all. So I was really proud of the fact that by being focused and finding my long-term soulmates in the Silent Spring Institute in Boston and what’s now called Breast Cancer Prevention Partners in San Francisco, I’ve been able to compound my role so much further than if I were trying to do it on my own. They’re the groups that have driven the push to eliminate fire retardants out of all our products. They’re the ones who got the liners out of water bottles. That all came from research from them. I can use my education and push them to try to be a little more business focused. It’s just me, but it’s incredibly leverageable when you find the right people to work with. I’m also proud of the fact that my daughter has little cards [about unsafe chemicals in health and beauty products] that she gives to all her friends. That’s one of the things Breast Cancer Prevention Partners did. It’s magic when you can turn that generation on so that they’re aware, because we weren’t.

Gloger: Being a mother of young girls, when I was going through this, I’m proud to be a survivor at the most basic level. I’m also proud thinking about my girls and the next generation and the example that I’ve set for them—that when a hardship comes along, how do you take that challenge and turn it into positivity and help others? I credit my mother for having me think that way. She wasn’t there with me when I was going through my battle. But just her way of being in her lifetime is what allowed me to have that strength during a really hard time. I’m proud of the women we helped during those years at Triple Step—I had big, massive dreams of how far this thing was going to go. But I’m proud that I saw that for my own well-being I needed to step away and continue giving back and doing philanthropic work differently.

Mannix: How do you feel your personal and giving philosophies changed after your cancer journeys?

Gloger: Because I was 31, and a young mom, I honestly hadn’t been giving very much [philanthropically] at that point. Subsequently, I joined my family foundation, which has allowed me to give really meaningful gifts to cancer organizations. Having the experience of breast cancer is core to how I function as a giver—giving financially to enact change.

Brown: I became more focused. Prior to [founding Twinkle], I was spreading $25, $100 here, there, trying to make everyone happy. Then I became much pickier, being very specific about understanding who I was giving to and where it was going to go and what it was going to accomplish.

Mannix: Joy is anti-inflammatory. What I mean by that is, we know the more anxious and depressed and unsatisfied you are, the more your whole body becomes inflamed, which itself is a trigger. So finding these things that give you joy and sustain you is one of the best things you can do for your health.

Brown: There was a woman on my street who was going through breast cancer at the same time I was. She started a garden. So when she was going through her treatment, she said, “I want to be here next year when all of this comes back to bloom.” It’s that idea of taking control of something. I took control of the food I ate. It’s a small thing, but it’s taking back something. So what the neighborhood started doing, when we knew our neighbor was coming up for difficult treatments—we piled her mailbox full with cuttings or seeds that would help her forward her garden. Five years after she went through all this, it was just the most amazing thing.

Brown: I say, “OK, you wish you could clone yourself, Wendy. Why can’t there be 100 of you? Then you’d be able to accomplish a lot more.” I see my giving to Williams as that. Yes, I give directly to foundations and people who are doing the work. But I want to fuel that. I need to keep pushing other people to get engaged and to go on that search as well—to find their passion and push it forward and to make this world a better place. That’s where I see the Williams connection. It’s a long-term play. But I think it’s a really critical one. I couldn’t have done what I did if I hadn’t been there.

Gloger: I will echo that. I love Williams for so many reasons. A large part is how they supported me when my mother was ill. But then also the fact that I had the tools when I was going through my illness to advocate for myself. I credit the school and then the network of people—that leveraging relationships, the friends that I was able to be in touch with. So giving back to the school does feel like an opportunity to continue that passion in the next generation of people.