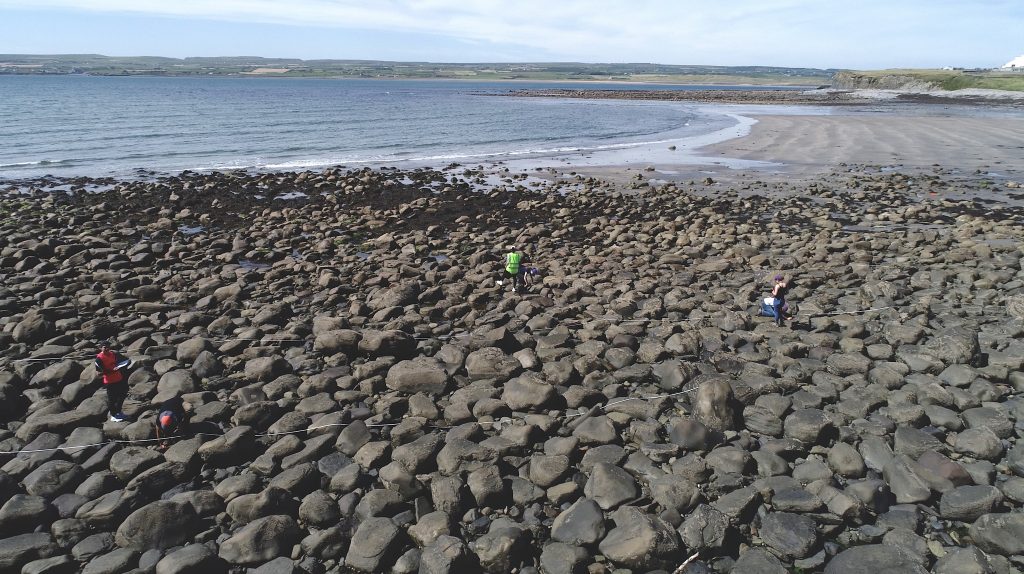 How do places in nature feel and sound? This question is one that longtime colleagues and friends Rónadh Cox, Williams’ Edward Brust Professor of Geology and Mineralogy, and Brad Wells, the Lyell B. Clay Artist in Residence, explore in their first-ever collaboration.

Cox received a three-year, $344,000 grant from the National Science Foundation (NSF) in 2020 for a project titled “Boulder beaches—the understudied archive on high-energy coasts.” The grant supports her research that began nearly 15 years ago on how boulder beaches respond to storms and change over time. The study focuses on 22 sites in Ireland, but because of the wide range of boulder-beach settings there, the results will be applicable to other locations worldwide.

“High-energy coasts, including boulder beaches, increasingly attract visitors, mostly unaware of hazards,” says Cox of these coastlines, which experience particularly intense wave activity. “In the Instagram era, photo seekers are driving up the number of accidents in extreme environments, and it’s not unusual for people to be taken off guard and dragged into the ocean by unexpectedly amplified sneaker waves or rogue waves.”

This past June, Cox and a group of five students studied some of those sites on Ireland’s western coast. The students collected field data for geoscience projects they will continue working on throughout the year, but the work also included capturing wave sound recordings for a musical component of the project. As part of the NSF grant, Cox is using music to investigate ocean wave activity and wave-coast interactions. In particular, she hopes to convey the unpredictability of wave motions.

Wells, founder and co-artistic director of the Grammy Award-winning vocal ensemble Roomful of Teeth, was an excellent partner to unite Cox’s studies with the ensemble’s dedication to “reimagining the expressive potential of the human voice,” according to its mission statement. “I loved this idea that Rónadh’s research could be boiled down to the essentials in a musical performance,” he says.

Wells sought a composer who could translate the sounds and unpredictability of ocean waves to an eight-person vocal arrangement. After several months he found the right fit in Anne Leilehua Lanzilotti, a Kanaka Maoli (Native Hawaiian) composer and sound artist whose work involves experimenting with nontraditional techniques. “I was searching for somebody whose music has a kind of material, textural aspect to it as opposed to more melodic,” he says.

Lanzilotti’s approximately 15-minute composition, On Stochastic Wave Behavior, debuted in August at MASS MoCA in North Adams, Mass. The music blends vocal sounds inspired by ʻŌlelo Hawaiian and layered harmonic tones that build patiently, coming to a powerful crescendo before returning to a calm. About her piece, Lanzilotti notes on her website that “reclaiming language and supporting indigenous language revitalization have been essential to my artistic work in the past year.” 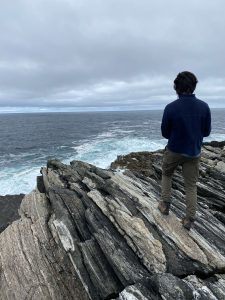 Nathan Liang ’25, one the students who visited Ireland with Cox in the summer, was also inspired by the musicality of the ocean and boulder coastlines. Using recordings he collected in Ireland, Liang created The Storm Orchestra, a digital instrument now available online, allowing anybody to “play” a storm or compose pieces using the sampled field recordings of waves and boulders moving. The Storm Orchestra is supplemented with other instruments, too, such as the bodhrán (an Irish frame drum), uilleann pipes and others.

“I hope that using music as a different and unusual framework may help the data jump the science-public divide so that the awareness can make its way into a more public consciousness,” Cox says. “From the Williams perspective, doing music-science collaborations has made students aware that science and art can be interlinked, and it’s a great way of encouraging more arts-minded students to consider science, and vice versa.”

Listen to The Storm Orchestra at bit.ly/storm-orchestra.