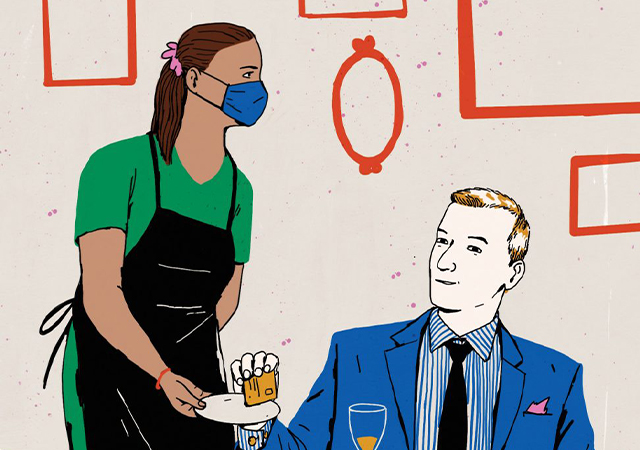 Where Economics Failed Us

Economists today interpret low wages as low skills and use the word “unskilled” as an epithet to describe the low-wage workforce: unskilled workers “deserve” low wages; they have no distinguishable skills and are therefore interchangeable. If they suffer unemployment, it can be ignored as the “natural rate” of unemployment, which cannot be lowered without accelerating inflation. Unemployment becomes an incentive for low-wage workers to get trained and join the high-wage workforce.

Economists choose not to interpret the fact that when Covid-19 struck, the temporary loss of millions of private-sector service worker jobs was in fact a trade-off to benefit society by reducing the spread of the disease—and therefore worthy of compensation for lost income. This is because, historically in the U.S., service workers have been slaves or recent immigrants and mostly women. They cook, serve food, clean, groom people, make beds, take care of children and older adults—in short, “they” serve “us.” Modern economics was founded in the late 19th and early 20th centuries by people who believed in eugenics and viewed the races of service workers as inferior. These foundational beliefs still infect the discipline.

Perhaps this helps to explain why, despite recent research showing that raising the minimum wage would be good, so many economists insist that it would be counterproductive. Economists equate value with money: Cheap things have little value and thus cannot be essential. Despite the pandemic forcing many people to appreciate the skill with which their favorite restaurant meals were prepared or their children tended, economists continue to wave off that workforce as unskilled. Paying “low skill” workers more would only encourage people to be lazy about acquiring skills; so, economists cannot admit into their theories or models the centrality of these workers’ jobs or industries.

Furthermore, while we have all seen the high level of U.S. inequality laid bare, we need to focus on how and why we accepted the depth of this inequality in the first place. For market signals to work in economics, the relative prices of things matter. The market will still function if the lowest-wage worker makes a decent living, as long as the highest-paid worker still earns thousands of times more, a price signal that makes people want to acquire more rewarded skills.

We have moved from a sick moral judgment about “deserving poor” to one of “deserving workers.” This judgment once held that people who were not working didn’t deserve society’s help. Now it holds that some are no longer deserving of society’s help because they are not skilled. In contrast, consider that when Wall Street tied itself in knots during the Great Recession of 2008, the nation instantly dumped billions of dollars on a tiny share of American workers to preserve their “vital” industry. The efficient flow of money is vital to an economy much as the heart’s movement of blood is vital to the body. But the stomach, kidneys and intestines are equally vital organs, and their failure will also kill you.

When it started to be evident that the pandemic and its economic fallout had huge, racially disparate effects, the discussion seemed to shift from being about why such a large share of Covid-19 cases were Black to how Black workers had higher comorbidities. Lost from view were the data clearly pointing to Black workers being in more dangerous positions for catching the virus, whether working in Amazon warehouses, hospitals or meatpacking plants.

Economists have been silent as the nation let market forces concentrate its health care delivery system. We’ve allowed our medical system to increasingly organize around economic efficiency and our labor markets to substitute efficiency for human dignity. We see the consequences in the radically uneven distribution of the human tragedies of Covid-19.

Let us hope the time will come when we truly understand how much we got wrong. Hopefully, it will bring introspection on deeper issues about our assumptions and why we hold them.