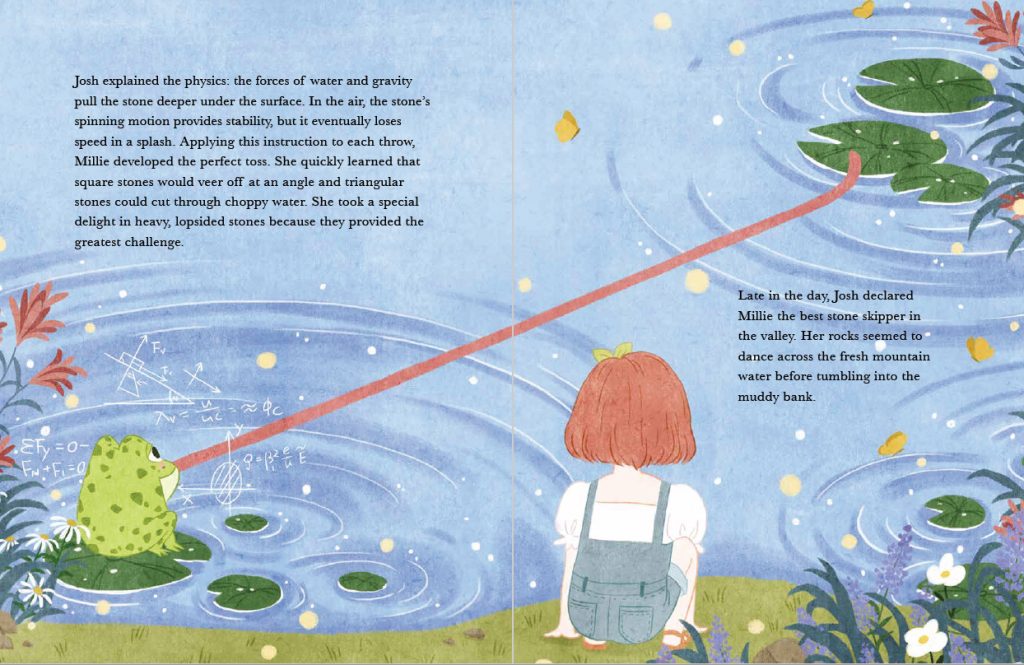 A senior-year assignment at Williams helped plant the seed for a new children’s book published by Olivia Polk ’18.

An English and political science major, Polk was a student in comparative literature professor Sarah Allen’s Folk and Fairy Tales in Literature and Beyond. For a homework assignment, Polk rewrote a fairy tale from the Brothers Grimm called “The Four Skillful Brothers.” The experience, coupled with studying the tales of Hans Christian Andersen at the Danish Institute for Study Abroad during her junior year, sparked a passion for literacy and education. The result is Millie the Magical Stone Skipper, published by Bird Upstairs Books in June 2022.

“I really enjoyed children’s books and the format of combining art and story,” she says.

In the Grimms’ tale, four brothers use their skills to rescue a princess from a dragon. Polk turned the story around so that three skilled, headstrong brothers would need the help of their sister, Millie. While the boys all have special talents and strong ambitions that lead them away from home, Millie struggles to find her talent in her own backyard. With the help of a magical frog, she eventually discovers the hidden talent of skipping stones, which proves useful when her brothers are threatened by a mean-spirited bandit.

After graduation, Polk began working in advertising and had no serious aspirations to become a children’s book author. But she used her free time to explore her creative side, and the idea of seeing the story she’d crafted at Williams as a finished product felt like a good challenge. She sent it to a publisher in September 2019 and explained her purpose for writing it, and an editor liked the idea. Polk says she then honed the theme of “patience, practice and perseverance” that had been at the root of her original assignment and—with lots of extra time due to Covid-19 lockdowns—worked with an illustrator to bring her story to life.

Polk says she included some elements from her own experiences in the story. The main character, Millie, is named after her great-grandmother, and the setting was inspired by meaningful places she knows well: the Tetons, rivers in her native Missouri, the Rockies and the Berkshires. Readers might even spot a familiar-sounding refrain when one character tells another, “Aim high and climb far—your goal is the summit, the sky and the stars!”

Allen says she was thrilled to hear that Polk had published the book. “It was such a rewarding moment for me as a teacher to learn that work she had done in my course had been so meaningful to her and to see how she developed it into a published book that many others will get to enjoy,” she says. “That’s exactly how folktales are supposed to work—to be transformed and passed on by generations of storytellers.”

“It’s wonderful to see Olivia playing a role in these traditions,” Allen adds. “Just as she was inspired by the stories we read in the course, I’m sure others will be inspired in turn by her book.”

Since the book’s publication, Polk has done some book signings at pop-up markets, bookstores and libraries, and she’s planning to visit some schools to read it aloud and meet with students. “That’s been the best part—interacting with the kids and engaging with them,” she says. “The more I get exposure, the more it just blows me away.”

She says she’s learned a lot from the experience of publishing a book—which took more than two years from the time her manuscript was accepted—and is grateful for all of the support she’s received along the way. As for future books, she’s keeping an open mind—just like Millie.

Illustration by Vanya Liang, courtesy of the publisher. Photograph courtesy of Olivia Polk.