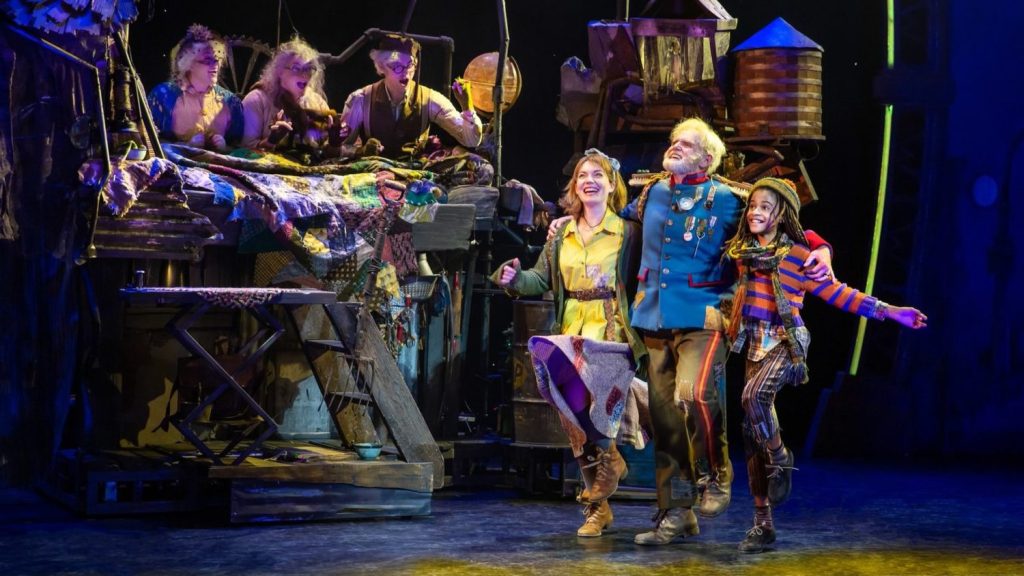 The summer is shaping up to be jam-packed with live performances, and making music, theater, television and movies has largely returned to in-person work. Yet for many Ephs in the arts, it’s hard to escape the emotional and logistical upheaval caused by the Covid-19 pandemic just a short time ago.

Abigail Bengson ’05, one half of the indie-folk duo The Bengsons; actor Gordon Clapp ’71; Auyon Mukharji ’07 of the band Darlingside; and actor/singer Claire Leyden ’16 share their experiences with staying creative during the shut-down caused by the pandemic, lessons learned and what it means to them to reconnect with live audiences.

Abigail Bengson ’05 says that she and her partner Shawn had been reticent about posting any of their content online prior to Covid-19, coming from a “combination of being chicken about it and feeling concerned that it wouldn’t feel real or authentically of our hearts if we were working online,” she says. “And then we just had to! Not only professionally we had to, but spiritually. For the first time ever, I would wake up going, ‘I wanna sing for people,’ and this is how we could do it.”

The duo, whose live shows are known for being deeply personal, began singing for people online during the shut-down, thanks in part to a commission from the Actors Theatre of Louisville to make “anything we wanted.” They created a piece called The Keep Going Song, described as “an intimate evening of storytelling through song.” While the piece was a critical and popular success (it was a New York Times critic’s pick, and the title track went viral on YouTube), Bengson says their focus in making it was supporting the activist community of Louisville, Ky., where Black medical worker Breonna Taylor was shot and killed in her apartment by city police officers in March 2020 during a botched raid.

The Bengsons leaned into creating digital work over the rest of 2020 and 2021, performing live Zoom concerts, making their first extended music videos and then developing musical theater pieces—all on their cell phones. Bengson says she found Zoom to be a powerful tool for connecting with audiences and making music more accessible. “I love performing on Zoom,” she says. “I feel closer to people that I am singing for or being sung to than live now sometimes, because I see your face, and I see your home. It’s extraordinarily intimate.

“Over Zoom, if someone is listening to me while they are feeding their baby or walking their dog, or, you know, doing their dishes, I’m quite moved by that,” adds Bengson, who hopes that artists will continue to offer online and in-person performances moving forward. Online performance “is not an instead” of live performance, she says. “None of this is instead. It should be an abundance. It should be another way to offer.”

While they had always intended to make their work more accessible “someday,” Bengson said over the course of the pandemic—living with Shawn’s father, who is extremely hard of hearing, for those months in 2020, and grappling with Shawn’s own gradual loss of hearing—“it became clear that that day was today, and in fact should have been yesterday.”

Auyon Mukharji ’07 and his Darlingside bandmates, Dave Senft ’07, Don Mitchell ’06, and Harris Paseltiner ’09, were recording an album when the shut-down caused by Covid-19 brought the process to a stop the weekend before they were scheduled to start their last recording block.

The band spent the next few months figuring out how to finish the work remotely, since each of the band members was quarantined. “I feel very fortunate to be in a group with three other guys who are all quite competent recording engineers and think about production,” Mukharji says.

In addition to navigating the logistics, such as setting up home studios and learning new software, there were also artistic aspects to consider. Mukharji says the band had to make sure the album “felt glued together and of a piece, even though it wasn’t all done in the same space, because there are ineffable qualities of a space” that impact how the recording sounds and feels.

While the album release had been planned to align with a tour in the spring of 2021, the band decided to release the album in October 2020—“a pretty dark time heading into winter without a vaccine,” Mukharji says. “From a personal perspective, it was really nice to put something into the world that we had thought a lot about and cared about at that time.”

Darlingside is now working on a new album for release in 2023 that’s being recorded in their home studios and bedrooms. Mukharji says the band is still wrestling with Covid-related logistical difficulties—two of his bandmates have young, unvaccinated kids at home—so schedules are often unpredictable. “Our experience finishing our last album remotely and in isolation was a largely unpleasant one,” he says. “But the process taught us how to confidently capture sounds outside of a traditional studio, which has allowed us a great deal of latitude in putting together this current project.”

In March 2020, Gordon Clapp ’71 was getting ready to enter the starry Broadway production of Aaron Sorkin’s To Kill a Mockingbird as Judge Taylor. “I made it as far as the George Washington Bridge,” says Clapp, who didn’t return to the stage in person until October 2021.

From his home in Vermont, Clapp—known for his Emmy Award-winning role as Detective Greg Medavoy on ABC’s NYPD Blue, Chaplain Orlovsky on NBC’s Chicago Fire and numerous other television roles—acted in “a lot of Zoom stuff,” including a weekly exploration of scripts and plays produced by Northern Stage, a regional theater in White River Junction, Vt. He also acted in the critically-acclaimed television shows Mare of Easttown and American Rust, both of which were filmed in person during the height of Covid-19 with extensive safety precautions in place.

Last summer, when Covid restrictions eased a bit, Clapp played the stage manager (his third time in the role) in Thornton Wilder’s classic play Our Town at Peterborough Players in New Hampshire. The production was staged outdoors, onsite in downtown Peterborough, which is rumored to be the inspiration for Grover’s Corners, the town in Our Town. Says Clapp: “Outdoor theater is challenging for a number of reasons, but it was incredibly moving to go out on stage and have that audience respond to us being there.”

Claire Leyden ’16, an actor and singer, describes her own experience in the spring and summer of 2021 as her “acting world burst open. March and April of 2021 were crazy months for me. I did my first commercials. I did my first TV work. It felt like all of a sudden the world was opening back up, and it was happening very fast, in a way.”

Part of that opening up involved Leyden doing self-taped auditions almost daily from her apartment in New York City. “One day I did four tour auditions,” she says, adding that she didn’t expect anything to come of them. “That’s not gonna happen—who’s on tour right now?” she recalls thinking. However, one of them did come through: the 2021-2022 National Tour of Broadway’s Charlie and the Chocolate Factory, in which Leyden is currently playing Mrs. Buckett.

Leyden also began recording music from her apartment in New York City, as she was singing in a professional octet for a church and working on a new opera when Covid-19 quarantine began. “I’m so impressed by theater and artistic and music communities who were able to make some lemonade out of all of these lemons,” she says, “and we have all of that on tape now, which is really kind of special.”

Sarah Sanders ’14 is a queer Jewish performer, writer, musician and curious collaborator raised in Montana and based in Brooklyn.