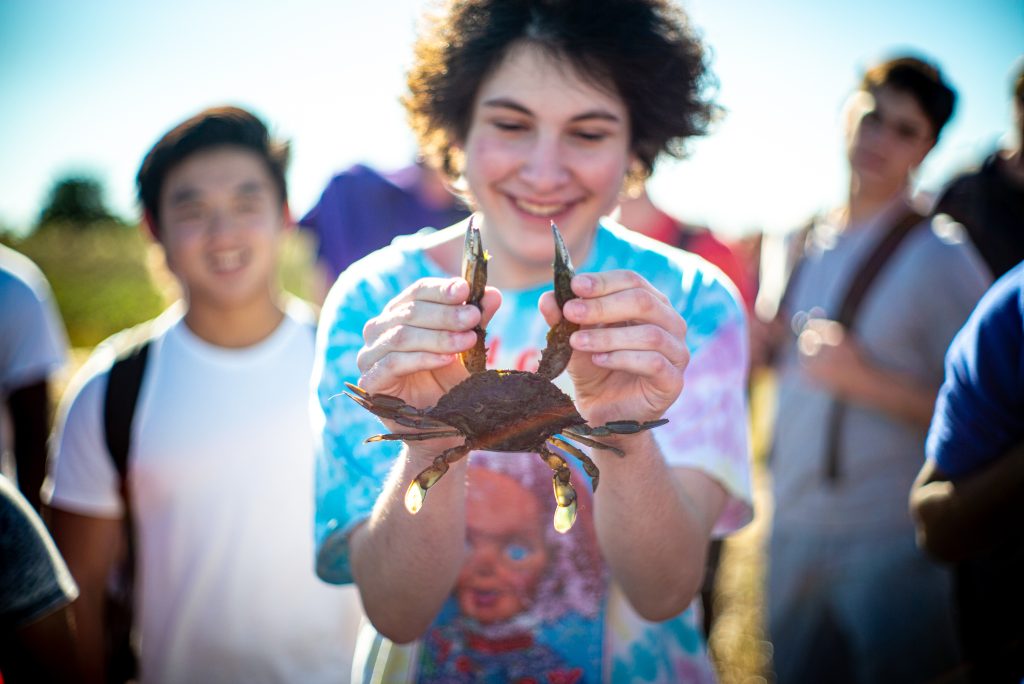 While registering for classes for this fall, Vanya Funez ’26 says she told her academic adviser that she didn’t consider herself “much of a STEM person.” The adviser suggested that she enroll in Oceanography, an introductory course taught by geosciences professor Mea Cook that combines lectures with guest speakers and a field trip to the New England coast. Now, Funez says, she’s hooked.

She and her classmates spent the semester studying topics including the archive of Earth’s history contained in seafloor sediments, the transfer of energy and matter in ocean food webs, and how ocean basins are created and destroyed. A highlight was exploring the shores of Connecticut and Rhode Island during a day-long trip facilitated by the Williams-Mystic Program.

On a warm day in November, the students sloshed through tide pools, examined sea creatures and took a sediment core as Cook and Williams-Mystic ecologist Tim Pusack brought to life concepts they’d been learning about all semester. At one point, she handed out oranges for students to throw beyond the surf to study longshore transport—how water moves along the beach.

The exercise was “a really cool way to test longshore current,” says Henry Oullette ’26, who also enjoyed getting to hold a blue crab. He says he is now considering spending a semester at Williams-Mystic, an interdisciplinary maritime studies program based at the Mystic Seaport in Connecticut.

A highlight for Felix Diaz ’26 was “taking a sediment core [from] past the dunes and seeing periods in time where hurricanes and storms had blown sand across them. We could look at this core and tell when Hurricane Sandy had occurred.”

Adds Diaz, who now plans to major in geosciences, “Looking at ocean systems and seeing how the world around me—the world that so many people take for granted—actually works has been amazing.”

Oceanography tends to attract students seeking to fill a divisional requirement or who are just curious about the subject matter, Cook says. Some 50 students enroll in the course each year, and about a half-dozen end up majoring in geosciences.

There’s a perception that the field is geared toward outdoorsy types. Cook says in the past many cross-country skiers and runners found their way to the major. These days, however, the geosciences are drawing students with a variety of interests, including environmental change and climate science, and leading them to a host of careers.

To give her Oceanography students a sense of some of the possibilities, Cook has invited guest speakers including an Arizona State University professor who discussed his work reconstructing an Indian Ocean El Niño in the geologic past and the director of fisheries sustainability for the World Wildlife Fund.

In October the class video-conferenced with Bryce Mitsunga ’13, who was in the North Atlantic aboard the research vessel JOIDES Resolution. He gave the students a tour of the various labs on the ship, and they watched as drilling equipment pulled a fresh sediment core out of the ocean.

Mitsunga planned to major in history or art history at Williams, but a sophomore-year geosciences course set him on a different path. He spent his junior year at the Williams-Exeter Programme at Oxford University, where he took climate policy classes. He returned to Williams and joined a geosciences lab looking at basalt samples extracted from beneath the ocean the summer before his senior year.

After working as an environmental consultant and earning a master’s degree at the University of California, Los Angeles, Mitsunga is now a Ph.D. student at Brown University, probing 3- to 5-million-year-old mud in search of answers to what was happening to trees and plants on the Iberian peninsula when what we now call the Mediterranean climate was emerging.

Cook has also conducted research on deep sea sediments drilled by the JOIDES Resolution, which she sailed on in 2009, in the Bering Sea. These days, she has four or five students working in her lab, using fossils in sediments to reconstruct past climates and ocean circulation. She teaches Climate Changes, and Geochemistry: Understanding Earth’s Environment, in addition to Oceanography.

The field trip with students to the seacoast in November is a long day, bookended by three-hour rides to and from campus. They pack in a lot, exploring a rocky point, a sandy barrier beach, a salt marsh and an estuary. But, Funez says, it was more than worth it.

“It was really cool to be able to identify the plants and animals of the rocky shore,” she says. Funez held a whelk egg case—a series of long, linked pouches that the marine mollusk lays its eggs in that is anchored to the sea floor until the eggs hatch—”something I wouldn’t have done before,” she says

Funez has already signed up to take another geosciences course in the spring: An Unfinished Planet, exploring plate tectonics. Asked if she still thinks she’s not much of a “STEM person,” she says, “Definitely not—Oceanography really introduced me to a new side of STEM, and I absolutely love it.”

—Amy Mayer is freelance science writer who lives in California and sailed aboard the JOIDES Resolution as the outreach officer on Mitsunaga’s expedition.

See photographs of the Oceanography class’s trip to the seacoast in this Flickr photo album. Above: Photograph by Bradley Wakoff/Berkshirian Images