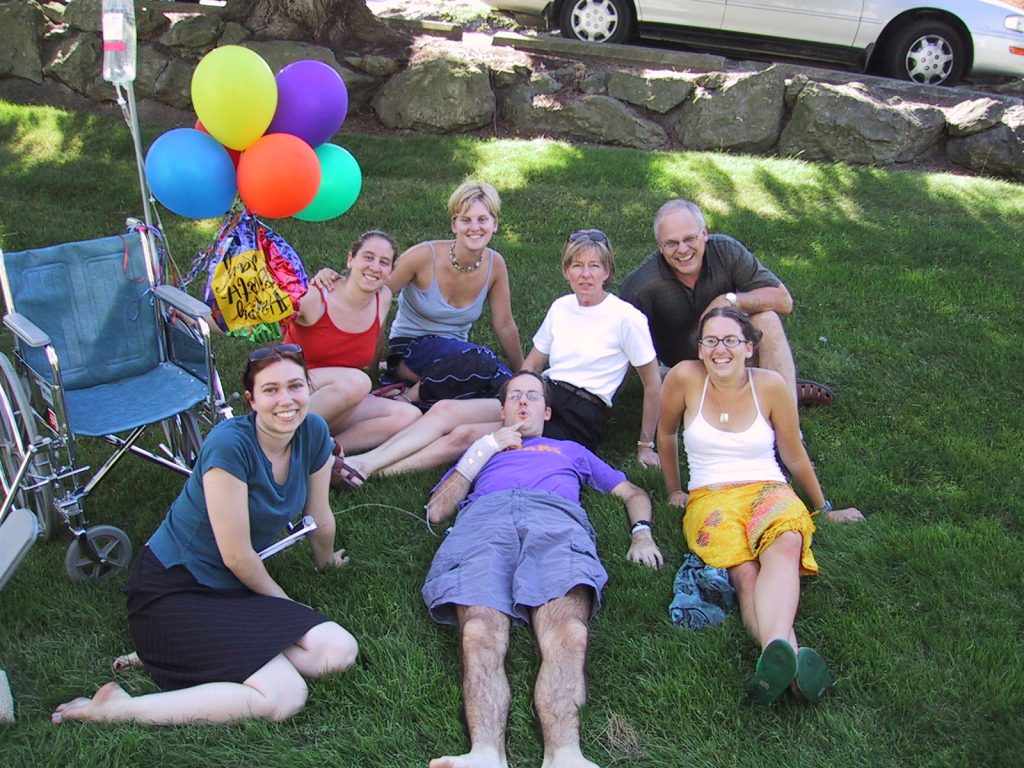 After Austin Duncan ’02 survived a severe traumatic brain injury, his friends helped reintroduce him to his world. Now, he’s researching the importance of relationships in TBI recovery and other disabilities.

On April 24, 2003, Austin Duncan ’02, was traveling around Egypt with his friend Ningchuan Zhu ’02 while on a break from his Fulbright-funded research in Kuwait. The two had spent the day wandering around Cairo before taking a train to Luxor. Duncan remembers crossing the Corniche, a promenade along the east bank of the Nile, and walking toward the Luxor Temple. He turned and shouted back to Zhu, “Stop being scared and just cross the road.”

That’s the moment everything went blank.

A mirror on the side of a bus hit Duncan’s head, sending him flying several feet into the air. Zhu came running to find him unconscious and bleeding in the middle of the Corniche. A British nurse eating lunch across the street rushed over, instructing Zhu to take his shirt off and wrap it around Duncan’s head. The police arrived. Duncan was taken to a hospital in Luxor, then transported to one in Cairo and, later, two in the U.S.

Duncan had suffered a traumatic brain injury (TBI) and didn’t regain consciousness for more than a month. His first memory after the accident is of his 23rd birthday, on June 7, 2003. He remembers sitting on the grass outside a hospital in Seattle, Wash., his IVs still connected, surrounded by his parents and former Williams classmates from Woodbridge House: Kari Sutherland ’02, Ronit Stahl ’02, Rachel Seys ’02 and Abigail Rosenthal ’02. Some had been visiting Duncan since his transfer to the U.S., while he was still unconscious.

At the time of Duncan’s injury, he had scored four points on the Glasgow Coma Scale, just one point above “totally unresponsive.” The scale is used to describe a person’s level of consciousness following a TBI or similar injury. While it’s rare for anyone with a rating of four to recover with few functional deficits, Duncan says, his doctors told him that his was one of the strongest they had seen. He wondered if it was a line of encouragement—something the doctors said to every patient. Yet he also suspected his case might be different. He remained intensely motivated throughout his inpatient and outpatient rehab, and he had friends and family by his side every step of the way.

“When you have people to hang on to, who can reintroduce you to your own world, it can help you make your life be the best that it can be,” Duncan says, “and that is exactly what my Williams colleagues did for me.”

In the years that followed, the anthropology major returned to Williams to work as a research assistant in the Department of Anthropology and Sociology. He then traveled to Kuwait to finish his Fulbright before enrolling in a Peace Corps’ Master’s International program at the University of Washington and conducting ethnography fieldwork in Cameroon. Afterward, he enrolled in a medical anthropology doctoral program at the University of Arizona.

Duncan continued to experience TBI-related difficulties, particularly double vision and memory loss. He turned to a community of TBI survivors in Tucson for support and fellowship as he struggled with coursework, and he eventually took medical leave in 2016. He returned to Seattle for outpatient counseling and met regularly with support groups for TBI survivors.

“I’ve had to restructure my brain such that I could learn to do things that I used to do,” he says. “I’ve learned to get by with my deficits. It doesn’t mean that I overcame them but that I’ve learned to live in a way that they don’t stop me from doing what I need to do.”

Through conversations with survivors, Duncan realized that his friends’ involvement in his recovery was rare. He began to wonder if their influence played a role in his progress.

Duncan rejoined his doctoral program and shifted his research focus from rehabilitation practices in Sub-Saharan Africa to disability anthropology—a relatively new discipline that explores the lived experiences of people with disabilities and how societal structures can exclude people with impairments. For his dissertation, he conducted a study sponsored by the National Science Foundation on the social lives of TBI survivors in Seattle.

His work centered on the role of significant others, or SOs. In this context, the term refers to the people who make a difference in the recovery of a TBI survivor (not just to romantic relationships). To be an SO, he says, someone needs to recognize that every survivor, every injury and every impairment is different and that a survivor’s needs can change, sometimes on a minute-to-minute basis.

“A good SO is adaptive and responsive and understands empathically, without thinking about it, what the survivor might need or want,” he says.

“When you have people to hang on to, who can reintroduce you to your own world, it can help you make your life be the best that it can be, and that is exactly what my Williams colleagues did for me.”
—Austin Duncan ’02

His research affirmed what Duncan had suspected all along about the importance of his friends in his own recovery.

“I knew at the time that it was a big deal,” he says. “And I knew that it was not common for survivors to have as close connections to their friends as I did with mine.

“But I didn’t realize how much that was a process in TBI recovery until I did this research. It’s actually one of the conclusions that I made, that this is a really big deal, and doctors need to start paying attention.”

Duncan published his dissertation in December 2020 and has since expanded his research as a postdoctoral scholar with the Sonoran Center for Excellence in Disabilities and the Department of Pediatrics in the University of Arizona’s College of Medicine. Now, he’s applying his research to intellectual and developmental disabilities, particularly autism and autism spectrum disorders, which, he says, share several similarities with TBI.

He hopes to influence the general public’s understanding of TBI survivors or anyone who is harmed by society for being different.

“The only way we’ll get to a place where don’t visit that kind of harm on other people is by understanding that we can all be different in ways that are completely unexpected and unknown,” he says. “I want to sensitize people to know how different from each other we can be while, at the same time, we’re all human.”

Learn more about Duncan’s research in this episode of the Survivors2Survivors podcast and in his blog post for Platypus, a site “for discussion and exchange on anthropological studies of science and technology as social phenomena.”

Kim Catley is a freelance writer in Richmond, Va.