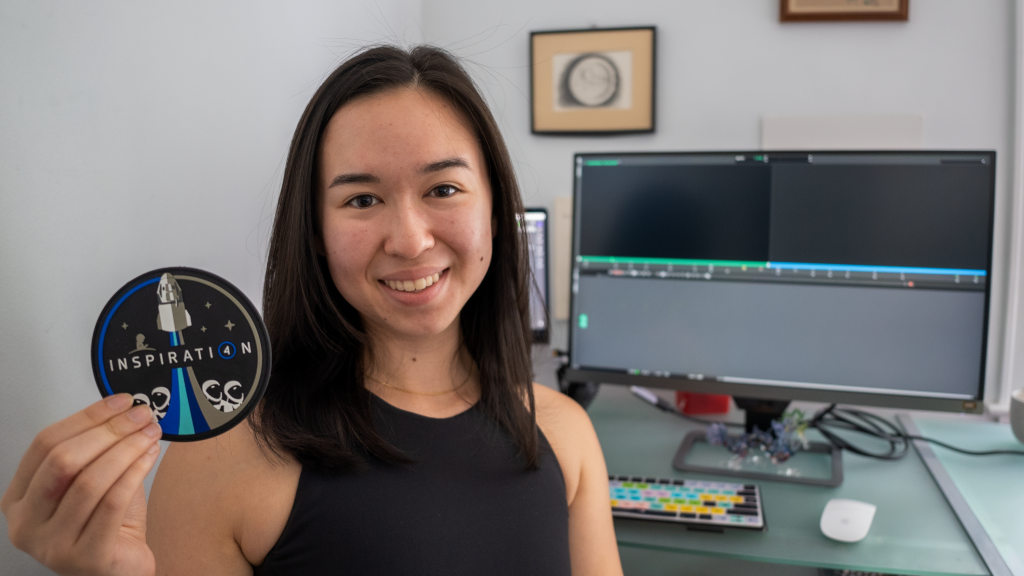 With about two weeks to go in her junior year, Rebecca Kuo ’22, a music and political science major from Buffalo, N.Y., received a call that would change her life. Jason Hehir ’98, director of the new Netflix docuseries Countdown: Inspiration4 Mission to Space, which chronicled the September 2021 SpaceX Inspiration4 orbital mission, recruited the budding filmmaker to join the series’ editing team for the summer. Kuo worked on editing raw and archival footage, as well as interviews and shot footage from the launch site, to wrap around what would be near-live coverage of the actual mission. In a recent interview, she discussed her roots in Ephs sports coverage, what it was like documenting a space flight in almost-real time and how cork boards and index cards still factor into high-end TV production.

What’s it like to work on a professional project of this scale?

I had never worked in long-form TV before. There were people to do jobs that I was either used to doing on a really small scale or jobs that I had never before encountered the need for. For instance, we had an archival producer whose primary function was to find archived material for us. Also, the way that schedules would suddenly move around, and [activity] just kind of happened around me, was shocking. Since [the SpaceX mission] was a near real-time coverage event, we were working at a breakneck pace, and if you didn’t keep up, you’d have no idea what was going on.

How was this experience different from your video projects at Williams?

Before I came to Williams, I’d never touched a camera or editing software. I took a class freshman year called Introduction to Video Arts and got paired up with a classmate who was also interested in making videos. We worked really well together, so we started a freelance business, initially making videos for Williams sports teams. The first video we ever made was for Williams wrestling. But I don’t want to go back and look at it! I became good at shooting sports, and I was decent at editing, but [until the Netflix series] I had never really worked with voices and dialogue before. It’s a very different creative process. People often say that filmmaking, and art in general, is based on intuition. I’m not a fan of that. This is probably my Williams brain talking, but I think that when you can, you should try to break down your intuition, because nothing is natural; everything is learned and everything can be improved.

What’s something meaningful you took away from the experience?

One of my first big memories of transitioning into a world of long-form story building was in the editing room, where Jason had a corkboard with a bunch of index cards on it. The cards had the names of scenes written on them, arranged in vertical columns that represented episodes. We’d talk about the story and take out a card at a time. If the story fell apart, then we knew that card needed to be there. If we took out a card and nothing had changed, then clearly it didn’t need to be in the episode. And that really stuck with me.

What’s next for you?

I’m definitely anxious about the future, but who isn’t about graduating college? I’m faced with a tough choice: Do I go freelance, or do I try to find my way through corporate applications? They both come with advantages. My dream job is one where I can tell other people’s stories. I don’t feel compelled to tell my own, but I hope to be in a place where I can ask interesting questions and pick which stories to tell. If I’m creating and I can give voice to other people’s interesting stories, I think I’ll be happy.