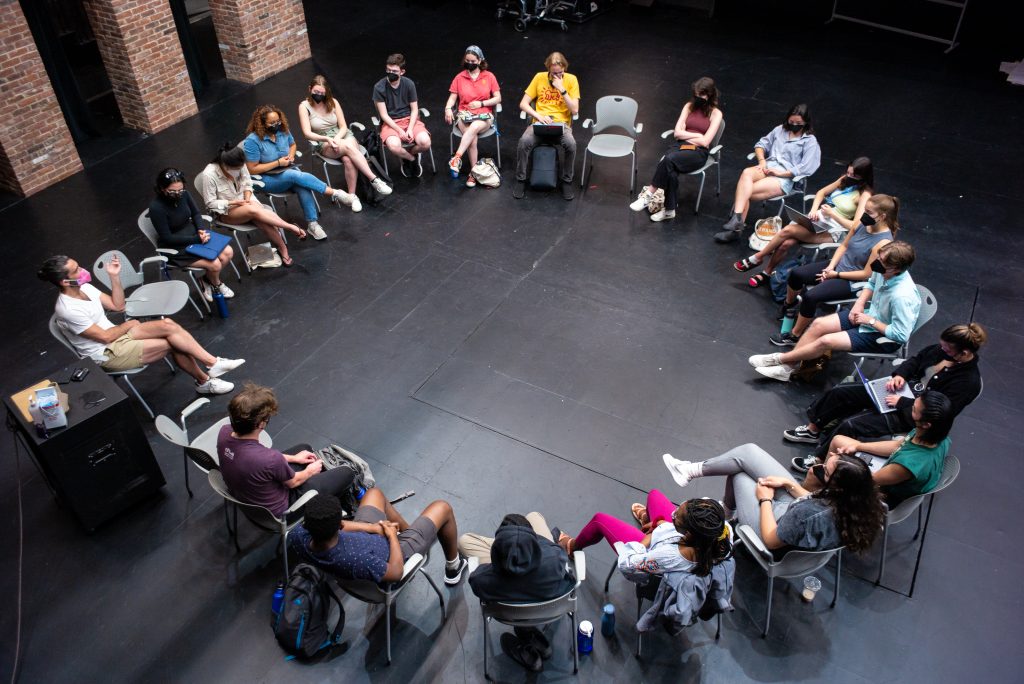 “What are the elements of theater that are most sparking for you right now?” asks Danielle King, producer and director of organizational culture for the Williamstown Theatre Festival (WTF), sitting in a circle of 20 students in the CenterStage at the ’62 Center. The students answer:

“Directing, a bit of technology.”

Those responses are exactly what Ann Marie Dorr has been hoping for. As the program director for the Williams College-WTF Summer Intensive Training Program, Dorr wants her students to get a taste of possible careers in theater besides acting. Introducing them to someone like King is all part of the plan.

“There’s no one path to doing what you want to do,” King tells them.

The students—10 from Williams and 10 from other colleges—are gathered for a newly imagined summer program where they learn by attending workshops and seminars, observing work done behind the scenes, meeting industry professionals and steeping themselves in the WTF culture. In addition to the strictly 40 hours of work they do within the program, they have the opportunity to participate in any facet of theater that piques their interest, whether it’s helping audience members find their seats or stitching in the costume shop. Since late June, they have been focusing on the three main shows that WTF produced this season, dissecting the issues and technical challenges of each in a classroom setting.

This is a big change from past programs, where student interns were required to do a lot of hands-on labor, such as managing props, cleaning, painting sets, handling paperwork and breaking sets after a show.

Nationwide, theater faced a reckoning after Covid disrupted the steady flow of entertainment that audiences became used to seeing. As theater professionals lost their source of income, they raised questions about everything from lack of diversity onstage to grueling hours and low pay backstage—topics that both Williams and WTF have pledged to address. Williams theater professor Rob Baker-White ’80 mentions past norms of 12-hour days in a dark theater. “People—and the unions—are starting to say, ‘Let’s have a more humane work environment.’ So the whole world is changing.”

Baker-White has been involved with the summer program since the late 1970s and has seen many iterations of it. “There have been some successful collaborations over the years, but nothing in a sort of systematic way,” he says. In December 2021, he, former artistic director of the Williams College Summer Theatre Lab Kevin O’Rourke ’78, and WTF Interim Artistic Director Jenny Gersten began discussing ideas to reinforce the education component of the program. Dorr was charged with leading the intensive and says that many of those from other colleges have never had the chance to do hands-on work in theater at their schools because Covid restrictions have kept them in virtual classrooms.

To help plan the program, Dorr borrowed some of the structure from O’Rourke’s curriculum—such as heavy emphasis on playwriting at the beginning of the summer—and experimented with other ideas. For example, she used her connections from a decade in the New York theater scene to invite a diverse group of artists to talk to participants about lighting design, improv, the playwright-director relationship and more. And she arranged the program within the confines of a 40-hour week. Although many students are used to overloading their schedules, she says, a cap on program hours gives them time to pursue their own interests, just as many artists do when they have to work a full-time job and fit their creative endeavors into their spare time.

Once the basic plan and funding were in place, Baker-White shared the information within his department and had students answer essay questions to apply. WTF advertised the program throughout the U.S. and chose 10 students separately from Williams’ process.

“I happened upon this program, and it seemed to fit exactly what I was looking for,” says Wylie McCann, a rising senior majoring in English and theater at Connecticut College. She has always been an admirer of WTF and had been searching for ways to become involved over the summer. Theater major Obi Nwako ’24 was intrigued after someone from the theater department encouraged his class to apply. Despite coming from different colleges, they both agreed that the group has formed family-like bonds over the program’s seven weeks. “I didn’t expect to get so much out of the interpersonal relationships,” says McCann.

This is another goal that Dorr, a former production manager with the Williams theater department, set for the program: to avoid having Williams students form a cliquish bubble. “They all seem to be moving in space and time together,” she says. “It’s valuable that there are 10 other people who are in 10 different schools bringing their lived experience and their academic experience to the table.”

One thing helping them form that cohesiveness is a chance to work together on a final project to answer the questions Where are we from? Why are we here? and Where are we going? They have been working through the devising process, wherein there is no hierarchical structure, but everyone collaborates on how best to investigate those questions and present the piece. Dorr is open to whatever this might be, whether it’s a performance of part of a play or movement-based gestures inspired by a piece of music.

The devising process helps the participants think of themselves as multihyphenate; instead of being only actors, they might be writer-director-actors, stage manager-producers or costume designer-sound technicians. Baker-White says this was one of the guiding principles of the program. “There are a lot of young people who fashion themselves to be performers. And the harsh reality of the world is that incredibly few of them end up actually doing this in their lifetimes. And so what we want to do is say, ‘Hey, there’s a whole world of interesting labor and engagement and art-making that you should be aware of, if you’re interested in this general field.’”

Wylie, who had always thought of herself as a performer first, is now considering being a director, having realized that she “gained the most from watching people do what they’re good at, so a directorial position would be great for me.” Nwako says the playwriting and sound design workshops felt like he was “in the water, trying to figure out how to swim, but it was nice gaining new skills and being able to do new things.” Both students plan to continue pursuing theater, but now they can see more avenues into it.

As for the acting dream, “I have offers,” says Wylie.

“Oh, yeah, I heard,” says Nwako. “The mailroom is getting loaded.”

A pause, and they both fall out laughing. “Not really, but that would’ve been an amazing article,” says Wylie.