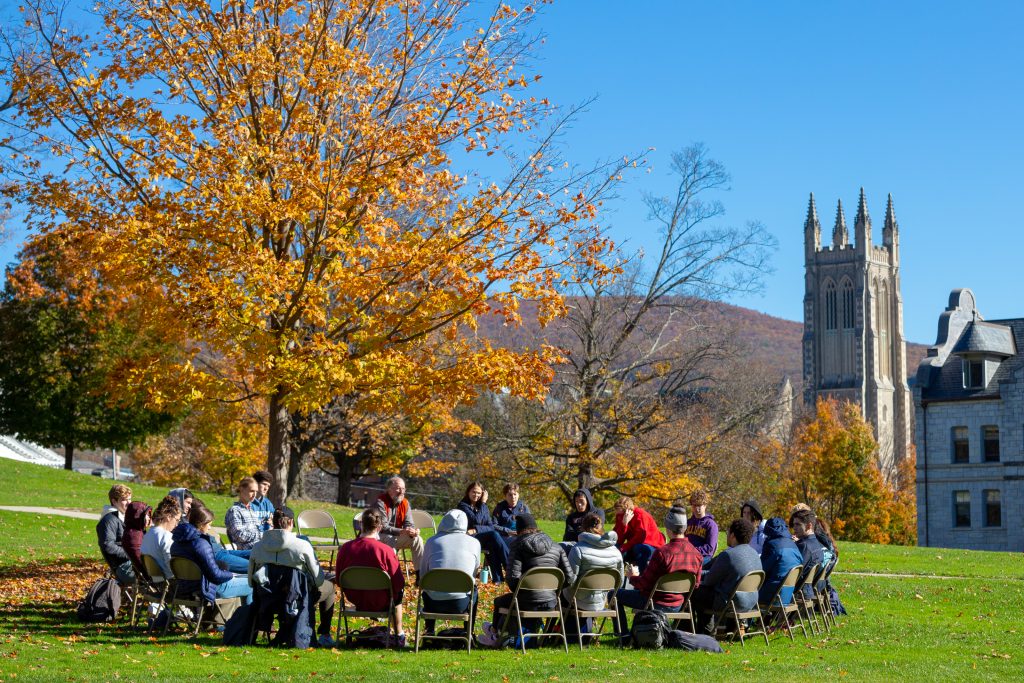 Early on there was ample evidence that my time as a visiting professor at Williams in fall 2021 would be unlike any other in my 40 years of teaching. It was not just the required weekly Covid testing or the first half-semester taught outside under an open tent, the wind scattering my lecture notes and student papers, repeatedly toppling the whiteboard—twice I had to duck—nor even the spectacle of students shivering and trying not to be distracted by the bone-chilling gusts off the mountains.

Nor was it having to end class a few minutes early—like a sixth-inning baseball game, called on account of rain—a sideways pelting from which there was no escape. After that, the warm shelter of Griffin Hall was welcome respite, even with masks. At least, by then, I had come to know their faces, and they had come to know mine.

No, there was something decidedly distinctive about the semester, elusive but well beyond the vagaries of Covid protocols and punishing winds.

In part, perhaps, it was the course itself, Media and American Democracy, offered in the shadow of a failed coup and U.S. Capitol insurrection. It is not every day that a course evolves in the midst of a true existential crisis. Nor was it the fact that the syllabus had to be repeatedly ripped up and revised to keep pace with events. As a journalist I was used to accommodating the unexpected. It’s what I did.

Maybe it was the unorthodox assignments, certainly new to the students: who else was having them listen to hours of conservative talk radio, watch Fox News, and steep themselves in the most toxic of conspiracy theories? (I half-anticipated an insurrection of my own.)

But now, as the semester draws to an end, I see that what set this semester apart from all others, had to do with the character of the students. I am not talking about their intellect or academic prowess—coming to Williams, I expected no less. And having taught at a number of other elite institutions, I was prepared to be wowed, and wowed I was.

But character is something else, harder to measure than an SAT score or a GPA.

What set these students apart was their willingness to listen, to keep an open mind, to resist grasping for premature conclusions, to not merely tolerate dissent, but welcome it as a test of their own rectitude. John Stuart Mill would have been beaming.

They were comfortable openly grappling with issues, not seeking the false comfort of safe harbors, understanding that true complexity does not always surrender itself to perfect clarity like some Rubik’s Cube, that even the best of theories and punditry may illuminate but seldom wholly bring to heel the matters that now confound us as a nation and a people.

These days that is a most uncommon trait, be it on campuses, in Congress, or in communities at large. I suspect it is the singular property that ultimately keeps democracies alive, that allows for actual governance, that places intellectual integrity above partisanship, and that makes room for the unum in the e pluribus.

This class was most welcome. Indeed, it was just what the doctor ordered. My optimism in the future had begun to flag, and the negativity bias in me had begun to run rampant. I remain in good company wondering whether citizens are indeed capable of preserving democracy: John Adams thought all democracies were doomed to commit suicide, and the historian Thomas Babington Macaulay believed they inevitably placed themselves into the hands of strongmen. Perhaps. But my time with my Williams students was a much-needed tonic, an antidote to cynicism and despair. Banal as it may be, it was I who was the student this fall. And that is what set this semester apart from all others.

A former Washington Post staff writer, Ted Gup is the author of several nonfiction books, and has been a Pulitzer finalist and Guggenheim Fellow.