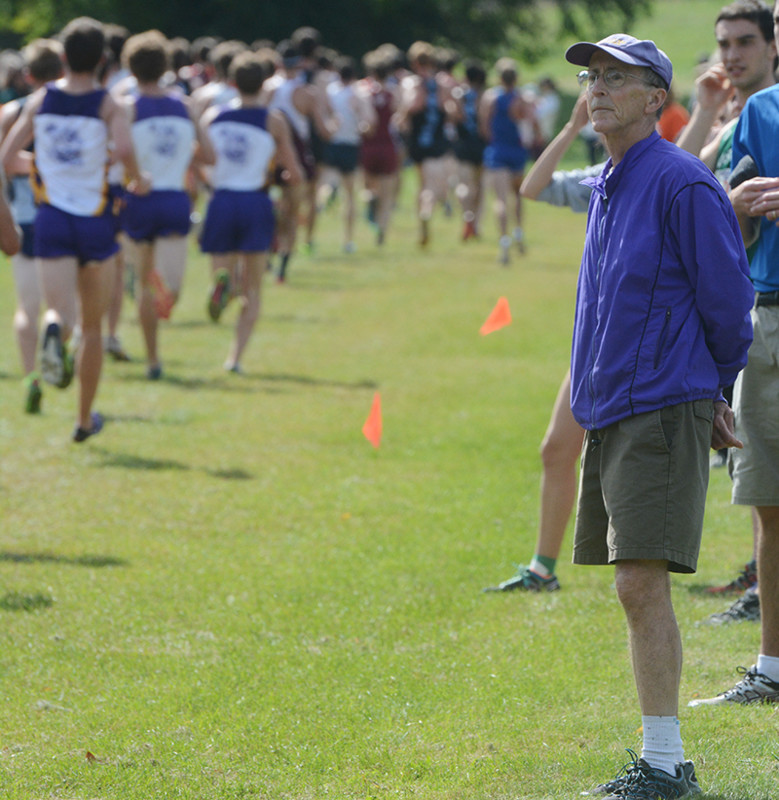 A Tribute to Pete Farwell ’73

It is a postcard-worthy autumn afternoon, sunny and crisp, the trees red and gold. It’s my freshman year, and I am on a run with three of my teammates on the Williams cross-country team. We are somewhere in the hills outside of Williamstown, and that element of uncertainty concerns us a little. None of us has ever been on this particular trail. In fact, we aren’t sure this is the trail we are supposed to be on. We hope we’re only five miles away from campus.

Our coach, Pete Farwell ’73, sent us out while the rest of the team did a series of mile repeats in Hopkins Forest. It was not unusual for Pete to have several workouts happening at once. He coached not by fiat but with a thoughtful, flexible approach. He listened and tailored training plans to individual athletes’ needs.

On that particular day, he judged the four of us not quite ready for the main workout—we were, variously, overworked, under-slept or getting over minor injuries. So he offered us a plan B: an easy 10-miler. He paused to think, rubbed his chin as if stroking a nonexistent beard and suggested what he thought would be a really nice route—a picturesque, rolling trail we’d find if we headed out a certain road past Five Corners, looked for a blue house with a flagpole, turned up the drive, followed the trail up to a field, turned right by the split-rail fence…

To us, his directions sounded convoluted, and the route seemed vague (in terms of reliable landmarks), though Pete’s coaching style was anything but. Every workout he designed had a precisely defined purpose. He could explain clearly what he wanted in terms of distances and paces, recovery time and even the pace of the recovery jog. From the nearly unlimited options in the Purple Valley—steep hills, gradual hills, long, short or medium hills, trails, grass fields, dirt roads, pavement—he chose terrain for each workout with care, based on the training effect he wanted to achieve. For Sunday long runs, he considered not only the distance, footing and hills but also the views by season, by what we might see and experience on the way.

Pete had a different relationship with the trails around Williams than we did. Almost 20 years out of college, he was still a faster runner than nearly anyone on the team and held the school record in the 6-mile. He had a top-25 finish at the Boston Marathon to his credit. He had run more miles in the woods than the rest of us combined. He knew the trails like most of us know our daily commute. He didn’t have to think about each turn—he just got where he was supposed to be going. Those of us out on the run that day would have had to stay in Williamstown for decades and run thousands of miles year after year before we’d know the area like Pete did.

He viewed running as a means of exploring the world, something he valued for himself as much as for us. The trails and mountains are at least part of what drew Pete back to Williams to coach in 1979. Even now, after a 44-year coaching career, he appears ageless, as if he could coach another 44. Outside of a few photos from the 1970s—which, in keeping with the times, show a very hirsute Pete—he looks unchanged: close-cropped hair, weathered face, wire-rimmed glasses, marathon-trim. Often he has at least the hint of a smile, as if he’s just remembered something that he, at least, finds amusing. Maybe it’s simply the fact that he’s still coaching; he once told me that practice was the best part of his day.

In its longevity and consistency, his career goes beyond successful, beyond merely excellent, to bends-the-known-laws-of-the-universe improbable. But impressive as his record is, it doesn’t fully capture Pete as a coach. I’ve always had the sense that, as successful as he has been, and as much as he loves winning, running has always been more than sport to Pete. It is a continuation of the educational experience in a different classroom setting. And the apparent fact that he stopped aging sometime around 1982 notwithstanding, I think his lengthy tenure as a coach has more to do with how perfectly his philosophy fits at Williams. Both he and the institution value excellence, exploration and education.

Thinking back to that picture-perfect day of our 10-miler, we probably weren’t paying close enough attention to Pete’s directions, each hoping one of the others knew where we were headed or believing we could figure it out along the way. As it does on long runs, our conversation drifted from subject to subject until it narrowed to whether we’d missed a turn or taken the wrong fork in the trail, where we were now and how long the afternoon shadows were growing.

We were lost, and though it didn’t happen often, getting lost was part of team lore. Once in a while, the upperclassmen had told me, runners—through inexperience, inattentiveness, unmerited confidence in their sense of direction or relative unfamiliarity with every single rock, fencepost and tree that could serve as a landmark—inadvertently turned their assigned long run into a very, very long run.

We all made it back to campus relatively unharmed, and Pete was still waiting for us. We reckoned our “easy” 10-miler had reached close to 17 by the time we were dragging up Water Street toward the field house. The sun had gone down, and I was just hoping to make it to dinner before the dining halls closed. One of my companions asked if any of us had ever run a marathon—he had done a five-mile run that morning, and it crossed his mind to tack on another four just to say he’d completed a marathon’s worth of running in a single day.

—Stephen Lane ’93 teaches social studies at Concord-Carlisle High School in Concord, MA. His second book, Long Road to Glory, about the first women’s Olympic marathon, will be published by Lyons Press in Fall 2023. You can see more photos of Pete Farwell ’73 in this online gallery.

Above: Cross-Country Coach Pete Farwell ’73 in the fall of 2015. Photograph by Kris Dufour

Pete Farwell ’73, cross-country and track & field coach, is retiring this spring after a 44-year career at Williams. His tenure has been marked by innumerable honors, and this past fall, in his final cross-country season, the men’s team finished sixth and the women’s team ninth at the NCAA championships.

In 44 years as the men’s cross-country coach, Pete has led the team to 19 NESCAC titles—or nearly half of the titles on offer. (There have been 39 NESCAC team cross-country championships, the first in 1983.) The team qualified 29 times for the NCAA championships (NESCAC first permitted its teams to compete in the NCAA national championships in 1993), with 11 top-five finishes and two national titles. And they’ve won 23 of the last 25 Little Three titles. He has been honored nine times as regional coach of the year and once, in 1995, as the national coach of the year.

After taking over as women’s cross-country coach in 2000, Pete led the team to nine NESCAC women’s titles and 18 Little Three titles. His teams have qualified for the NCAA championship every year, have finished in the top five 14 times and won the NCAA title three times. In the past 17 years, the Williams women have never finished outside of the top 10 at nationals. He has been honored as regional coach of the year four times.

Pete served as men’s and women’s track & field head coach from 1988 to 2001, as well as in 2008 and 2013. His teams won a total of 20 men’s New England championships (nine indoor, 11 outdoor), 15 women’s titles (six indoor, nine outdoor), 11 men’s and 10 women’s NESCAC titles, and four men’s and six women’s ECAC titles. The men’s team finished in the top 10 at NCAAs seven times, the women 10 times. Sixteen times, he was honored as the regional track and field coach of the year (11 as the men’s coach, five as the women’s coach). In 2017, he was inducted into the U.S. Track and Field and Cross-Country Coaches Hall of Fame.

To honor and celebrate Pete’s retirement, XC and Track and Field alumni are invited to events on the weekend of April 21-22, 2023. Please contact the Alumni Engagement office for more info.