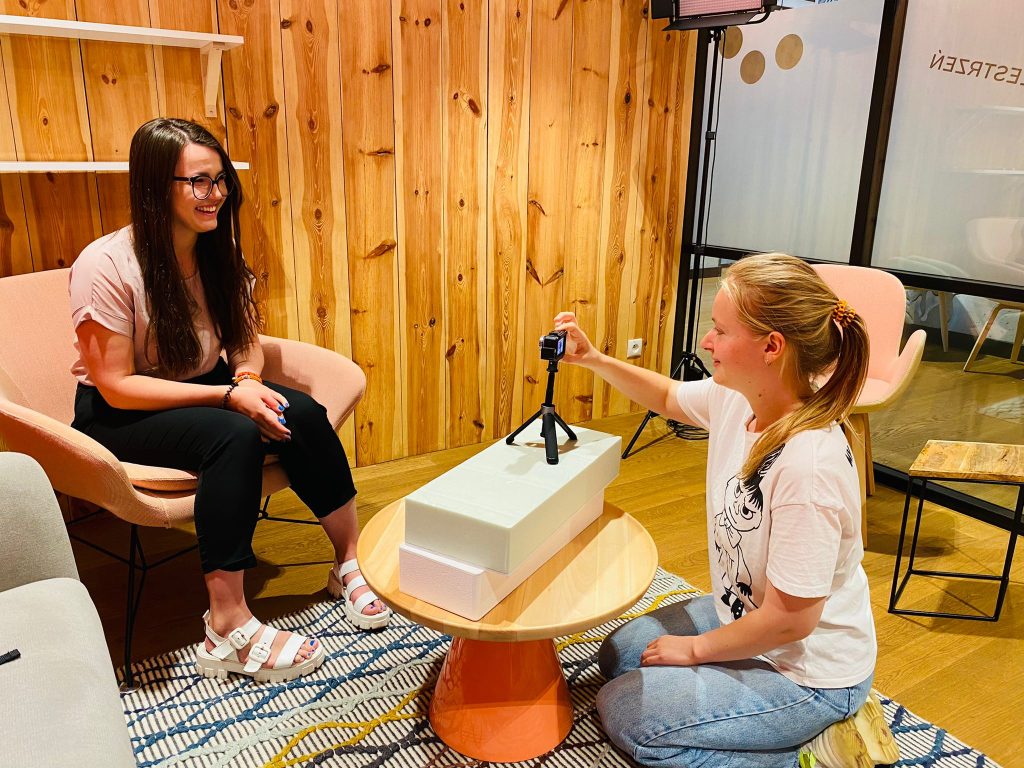 Over the summer, sophomore Diana Sobolieva traveled to Poland, where her mother, grandmother, aunt and cousins were living after escaping from Ukraine. Sobolieva was already at Williams when the country was invaded by Russia, so she asked about their lives as refugees.

She was surprised to hear how much her grandmother hoped to return to Ukraine as soon as the war ended.

“She told me how she would have to clean up her house from the debris and shattered glass and how she would replant her garden,” Sobolieva says. “It made me think about how much elderly people are connected to their home and how much hope they have.”

Sobolieva’s conversation with her grandmother wasn’t just casual conversation or even an effort to preserve her family’s history. The interview was part of a documentary project to record the experiences and reflections of Ukrainian and Afghan refugees living in Europe.

The documentary arose from the work of David Edwards, the college’s James N. Lambert ’39 Professor of Anthropology, who has been researching Afghanistan since the 1970s. Last spring, Edwards proposed a joint summer program involving Williams College and the American University of Afghanistan (AUAF), where he serves on the board of trustees. He wanted students from both universities to team up and produce video documentaries featuring Afghan refugees in Europe.

Early in the project’s development, Russia launched its invasion of Ukraine, sending even more refugees to Europe. Edwards saw an opportunity to include Ukrainian students at Central European University in Vienna.

With only a few weeks to recruit students, Edwards reached out to faculty at all three universities, looking for students interested in refugee issues and ethnographic research. In the end, seven Williams students including Sobolieva, seven Afghan students from AUAF, and seven Ukrainian students from CEU gathered in July in Geneva, Switzerland, for the project’s launch.

“The Ukrainian students had gone to school in September, and suddenly their country’s at war, and they no longer had assurances they could go back,” Edwards says. “For the Afghans, their country has been at war for years, and many of their parents have been refugees. And most of the Williams students were coming from a position of limited exposure.

“I wanted the students to not only get to know people with very different life experiences but to live with them and work together as a team.”

Everyone started with a weeklong boot camp where they had practical training on how to handle camera equipment as well as discussions about the logistical and ethical issues of interviewing and ethnographic research.

Sobolieva says she and her partner, a student from AUAF, were walking around Warsaw when they saw a couple waiting for the bus and holding a dog with a Ukrainian pin on its collar.

“At first, I was scared to talk to them. I didn’t know where to start,” she says. “It turns out they were from the same city I’m from, and they were excited to talk to us. At the end of the conversation, they told us they had elderly parents at home, so the next day, we went to their apartment to interview their parents as well.”

After two weeks of filming, the teams reconvened at the Institute of Ethnology of the Czech Academy of Sciences in Prague to edit their footage and share their clips.

Now that students are back in their home universities, Edwards is working with his collaborator Alžběta Kovandová Bartoníčková, a Czech filmmaker and doctoral student at the University of Kent, to produce a comprehensive documentary titled In Flight: Afghan and Ukrainian Stories from Exile. This semester, Sobolieva and other students are assisting with translating the footage before Edwards returns to Prague in January for a month of intensive editing.

After that, he plans to submit the film to festivals and to show on TV in Europe and the U.S. He also hopes work with the students to organize film screenings at each of the three colleges.

Edwards says the film will feature episodes that highlight different aspects of life for the refugees. For instance, one episode looks at the use of mobile phones to stay connected with family members back home. In it, one woman describes how her baby’s only connection to her father is through the phone.

“It’s a film that tries to humanize and to document, but in a way that’s narratively, cinematically interesting,” he says. “It dissects elements of what it is to be a refugee, how they live their lives, and what Ukrainians and Afghans have in common.”

You can learn more about the project—and watch the trailer for the documentary—on the website for In Flight.

—Kim Catley is a writer based in Richmond, Va.

Above: Williams sophomore Diana Sobolieva (right) of Ukraine traveled to Poland to interview Ukrainian and Afghan refugees living in Europe about their experiences and reflections for a documentary project.