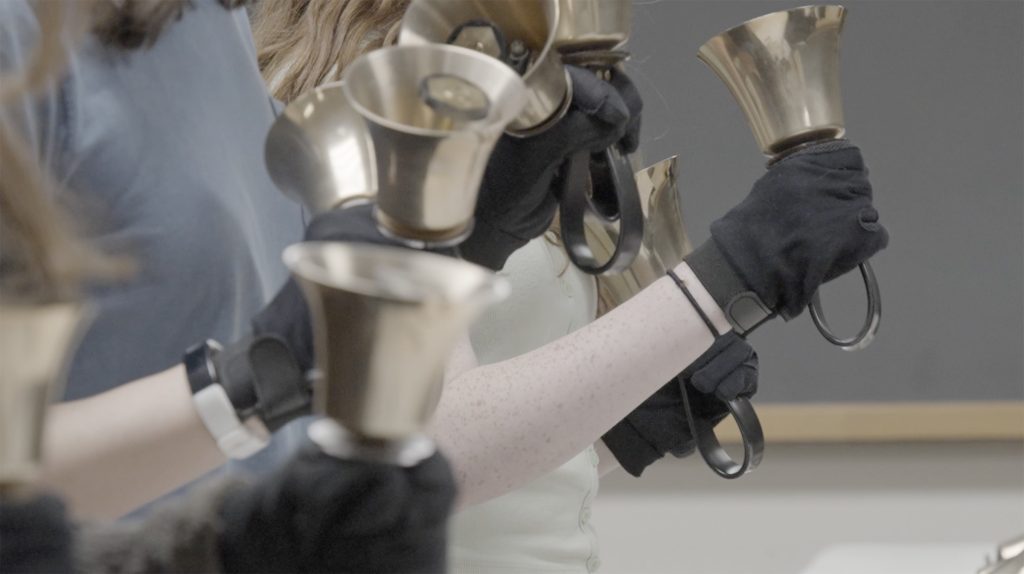 Following the Williams College Handbell Choir’s first run-through of “All I Want for Christmas Is You,” a chorus of voices saying “Not bad!” “We made it!” and “At least it sounded like the right song” rings through the room, accompanied by laughter. Despite the fact that half the choir is composed of new members, the familiar tune of Mariah Carey’s ubiquitous holiday pop song is transformed note for note by the warm, echoing rings of handbells.

After struggling to maintain membership and rehearsal space amidst the pandemic, when half of their members were remote, the handbell choir is back in full force. Director Seamus Connor ’23 and returning member Nicole Albright ’25 hung up posters all over campus and sent notices through the Daily Messages system to attract enough students to keep the group alive. They also recruited at the Purple Key Fair, Williams’ club fair held in early fall, where Ava Solis ’26 said she had so much fun trying out the different bells that she knew this was a group she needed to join. Eventually, Maya Barr ’26, Rachel Schmidt ’25 and Samantha Strickland ’26 joined them to form a team of six.

Solis was able to read music before joining the choir but had never played handbells before. Ranging from experienced music aficionados to students who color-code the notes in their sheet music, the choir rehearses for two hours each week on the bottom floor of the Bernhard Music Building, their echoing sounds contained within the walls of their practice room. With the help of faculty adviser and music professor Marjorie Hirsch, the students use a five-octave set of Schulmerich handbells arranged like a piano on a long table covered with white cushions. Each student typically stands behind a designated set of bells wearing black gloves meant to protect the instruments.

The group’s repertoire includes arrangements and original compositions prepared for events such as the college’s annual Christmas Service of Lessons and Carols and an independent concert held at the end of the year. They use handbell-specific vocabulary; for example, when faced with many notes in a row, a student might ask, “Is that a four-in-hands situation?” to which another responds, “You might have to do some four-in-handing.” Or if someone is overwhelmed with a string of notes in a row or sees another member sitting idle during a song, they might “offer up a bell.”

Despite the serious setup, the choir bonds through moments of fun, singing, “Put the choir in handbell choir!” while working through some rhythmic hiccups. The cohesion is part of what Solis enjoys. “I love that handbells is a very team-oriented activity,” she says. “We all have to collaborate to make sure that the songs are played to their fullest potential. I also love how welcoming the other members of the choir are. There are a few other first-years in the choir, and the older members are so nice and always willing to answer our questions, handbells-related or not.”

The handbell choir’s first performance of the year will take place at the Christmas Service of Lessons and Carols on Saturday, Dec. 3, at 4 p.m., where they will play favorites such as “Winter Wonderland,” “Christmastime Is Here”—and, of course, the Mariah Carey standard. “While many attendees don’t come just for us,” says director Seamus Connor ’23, “the opportunity to share our music with others feels so special.”

Lucera Whitmore ’23 is a student assistant in the Office of Communications.