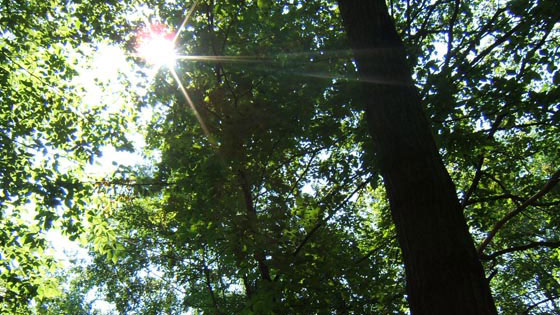 Henry Art, Robert F. Rosenburg Professor of Biology and Environmental Studies at Williams College, has begun the fourth census of the permanent plots in Hopkins Memorial Forest (HMF), a research project that is celebrating its 75th anniversary. The survey started in August 2010 and will take two summers to complete. 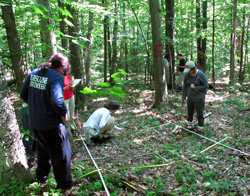 Art and his team of 10 students are carefully measuring the diameters of all trees that are 1/2-inch in diameter and larger in a system of 425 permanent plots, each being 1/4-acre in area, that were established by the U.S. Forest Service in 1935. In addition, several mature trees are cored to determine their growth rates and measurements are made of the shrub and herbaceous layers in a series of smaller plots nested in each tree plot.

“The long-term research project enables us to explore the legacies of past land on how the contemporary forested landscape functions,” said Art. “It enables us to construct a historical environmental impact assessment, giving us insights on how past human activities and natural disturbances such as ice storms and animal population fluctuations have shaped our forests. Understanding the changes that we measure in this typical New England forest give us not only a window on the past, but also provides a portal to the future as we analyze the impacts of environmental factors such a climate change on the sustainability of our forested landscapes.” 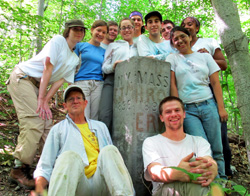 “Crown jewels” of the Hopkins Memorial Forest, the 425 permanent plots represent one of the finest long-term data bases on “unmanaged” deciduous forests in the world. They were established by the U.S. Forest Service in 1935. As the HMF has grown over time, the system has been expanded to include new land acquisitions.

Surveys of the permanent plots generally occur at roughly 15-year intervals. Norman Borlaug, the first agricultural scientist to receive a Nobel Peace Prize, conducted the first census in the 1930s while he was a forestry student at the University of Minnesota with the help of a team of Civilian Conservation Corpsmen. After the HMFC was given back to Williams, resurveys were conducted in the 1970s and 1990s by Art and numerous Williams undergraduates.

The fourth survey of the Hopkins Memorial Forest permanent plots is funded in part by the Holloman Price Foundation, a family foundation based in Richardson, Texas, that supports projects on wilderness environment and conservation in general and research on climate change in particular. Additionally, the project is funded by the Andrew W. Mellon Foundation, the Howard Hughes Medical Institute, and Williams through its Center for Environmental Studies and Science Division.

Hopkins Memorial Forest is located at the junction of Northwest Hill Road and Bulkley Street in Williamstown. The reserve, managed by the Williams College Center for Environmental Studies, spans more than 2,500 acres in Massachusetts, New York, and Vermont. The land was donated to the college by the family of Colonel Amos Lawrence Hopkins in 1934, and was deeded to the U.S. Forest Service in 1935 for use as an experimental research facility. The forest was returned to Williams in 1968, and since 1971 the college has actively maintained the forest, which it uses for teaching and research.

Drawing Beyond Your Comfort Zone

Music with a Master