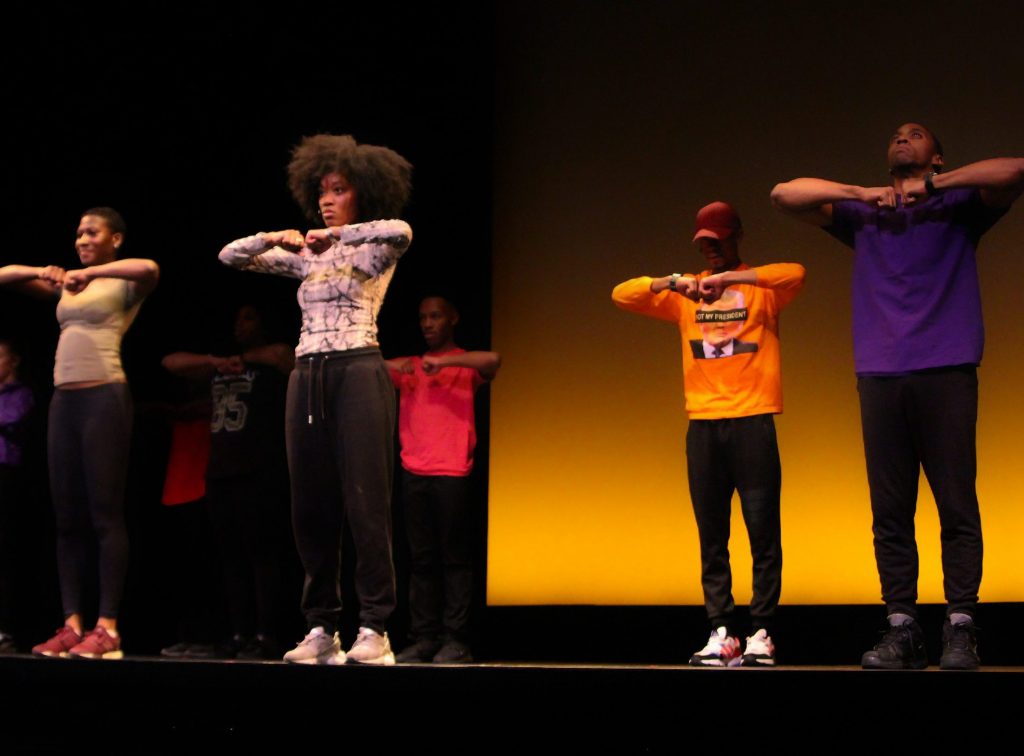 Unlocking the Story of Step

Unlocking the Story of Step

Maxine Lyle ’00 had been leading a group of dancers in rehearsals when the studio owner asked if they could “step softer.” Bewildered, Lyle thought to herself, “The last thing you should ever ask a Step dancer to do is step softer!” In what seemed to Lyle like retaliation for the noise, the owner of the studio—a midtown Manhattan spot popular with many artists—raised the rent, sometimes weekly, until Lyle’s group was priced out.

Years later, Lyle remembers the moment as just one of the times when Step, as an art form, has been misunderstood. These types of experiences have inspired her to write Step Show: The Musical.

A body-percussive form of dance, Step is sometimes regarded as a raucous exhibition rather than fine art with deep ties to Africa and the American South. In the early 1900s, African American fraternities and sororities developed Step groups to connect with one another in environments where many of them faced discrimination. In lively performances, teams use their bodies and voices to stomp, clap and chant in complex rhythms.

Growing up in New Jersey, Lyle learned about Step as a community activity. The culture of college life was so different from what she had experienced in her childhood that she cofounded the group Sankofa to share Step with classmates “as a way of tethering me to home,” she says. “Being creative balances me.”

In 2005, Lyle founded Soul Steps, a troupe of about 10 dancers who have toured extensively “to unlock the story of Step,” she says. The troupe has performed before a wide variety of audiences, from inner-city kids needing community engagement and a sense of leadership to the Dance Theatre of Ireland in Dublin, where members collaborated with Soul Steps on Irish step dance and clogging.

With Step Show: The Musical, Lyle hopes to burst through the barriers of race and class. While similar forms of step are immensely popular—the Irish step dance of Riverdance and the percussive show STOMP are distant cousins to African American Step—their audiences are primarily white. “Marginalized people don’t historically inhabit those seats,” she says of the theaters on and off Broadway and around the world where Riverdance and STOMP have run.

STOMP, she adds, doesn’t acknowledge its own history of borrowing heavily from Black musical traditions such as Step, which she believes can be seen as cultural appropriation. Of her musical, she says, “I bring that history to the table for the audience.”

Lyle is developing her musical as part of a residency with Williams’ ’62 Center for Theatre and Dance and the Department of Dance, spanning the 2020-2021 academic year. In October, she led an online conversation with playwright Katori Hall focused on the process of creating Black stories as Black writers. The discussion was followed by an online demonstration of Step and dance rehearsal of a scene from Step Show with Lyle, Jason Lucas ’02 and Tess McHugh ’11.

As her residency continues, she plans to stage an open rehearsal for and dialog of her work in February and a work-in-process performance in April. “Even though the theater industry is closed at the moment, this is a great time for artists to continue creating,” she says. “The residency has given me the resources to keep writing and developing my ideas during a season when many artists have had their work come to a halt.”

Lyle didn’t intend to write the book for Step Show—her MFA is in theater management and producing—until a friend convinced Lyle it was her story. Drawing from her own life, Lyle is building characters she sees around her, including a Black female heroine and a grandfather who passes down his knowledge of Step wrapped up in his love of its history. Lyle says it’s important to create characters who aren’t stereotypical and don’t fall into old patterns. “I’m writing what’s in my heart—being true to the show,” she says.

She also broke new ground writing music after a director noticed that Lyle was always humming a tune or leading others in the rhythms of a song. Lyle hesitated when the director suggested composing—she doesn’t have a background in music—but she is embracing that role, as well.

Her ultimate goal for Step Show is Broadway, though it’s not clear how soon audiences will be able to see it live. Her work with Soul Steps has also been on hold, largely due to the pandemic, but she’s looking forward to working with some of the troupe as cast members in her musical. She’s had early conversations with arts organizations about developing the work further and would consider staging an outdoor show in warmer months if the dancers can perform on the kind of stage needed to amplify their percussive steps. Even virtual programming isn’t out of the question.

Wherever such a performance occurs, Lyle says, “I’m confident you’ll see this work on a stage someday. It’s relevant, it’s fresh, it’s inspiring and it’s honest, and we need that in our world now more than ever.”