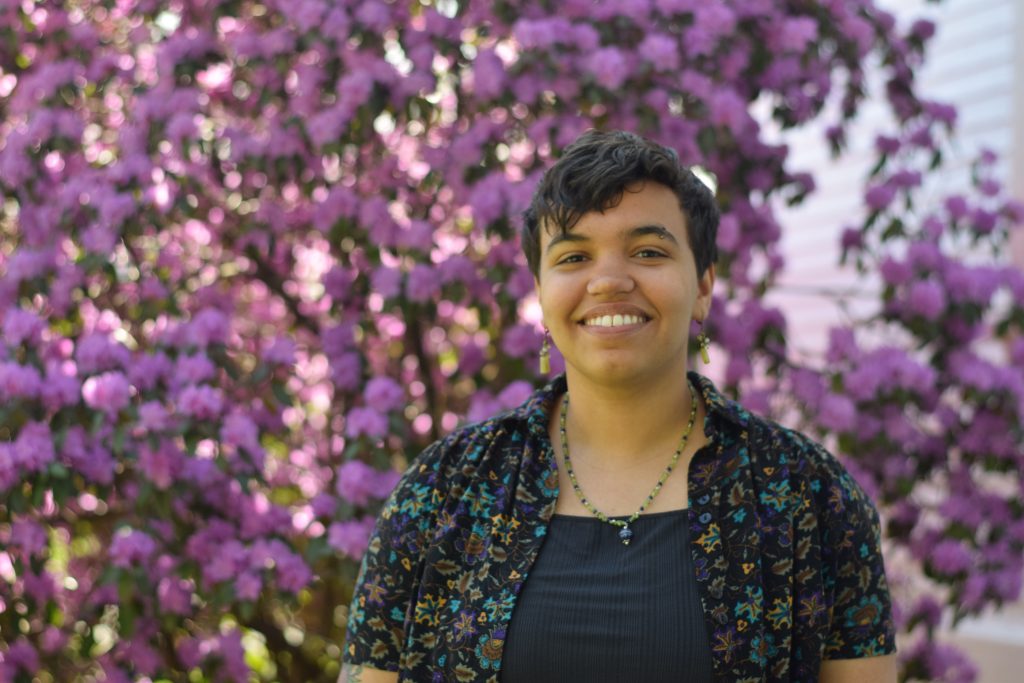 Gold Carson ’23, an award-winning, published poet, was recently named the recipient of a Beinecke Scholarship for students in the arts and humanities. Carson says they might never have discovered contemporary poetry if it hadn’t been for a copy of Tommy Pico’s Nature Poem left behind on a chair in a bookstore in Montclair, New Jersey, where they worked.

Nature Poem comprises a single poem of about 100 pages, infused with internet vernacular and social media slang. In it, Pico describes his inability to write a poem about nature despite the pressure he felt as an American Indian to identify with the natural world.

Carson says it was unlike any book they had ever read. “Within a stanza, I knew I was going to end up taking it home—thanks to my employee discount—that night,” they recall.

At the time, Carson was already involved in the local indie music scene and regularly performed as a singer-songwriter. Their artistic practice made for a natural transition to contemporary poetry, and they quickly worked their way through the bookstore’s poetry section.

They were also interested in social science and cultural studies and initially planned to major in American studies at Williams.

“But I found myself increasingly drawn to excavating the personal in pursuit of the political,” they say. “I wanted to do more creative things. That’s why I ended up going the creative writing route and majoring in English.”

Carson says Choi’s class, Introductory Poetry Workshop: Writing as Experiment, transformed their ideas of poetry and the writing process. In addition, they say, Choi organized a lecture series featuring poets, activists and community organizers that showed Carson a way to merge their interests in writing and activism.

“My poetry approaches political subjects from a personal standpoint,” they say. “Poetry has been important in a lot of social movements in the past. It has the power to invoke meaning alongside those movements.”

Poetry writing workshops like Choi’s allowed Carson to expand their body of work and further develop their voice. They assembled a chapbook—a short collection of poetry—called Live Action Capitalism that deals with subjects ranging from mental illness and the internet to Blackness and diaspora. The chapbook was published by Bottlecap Press in June 2021.

Carson’s creative work is also intertwined with their research. That same June, they received a Mellon-Mays Undergraduate Fellowship, a Williams program that offers faculty-mentored research and support for talented students from underrepresented backgrounds in preparation for graduate school and professions in academia. Carson focused their research on literary representations of animals and their role in contemporary poetry.

This kind of cultural analysis often serves as a foundation for Carson’s creative work, including a collection of poems they recently submitted as a junior for their honors thesis project. The opening poem was selected for the English department’s 2021 Bullock Poetry Prize of the Academy of American Poets, judged by guest poet and essayist Ishion Hutchinson.

It’s unusual for Williams juniors to complete theses, but Carson wanted to work closely with Choi, whose residency ends this year. Carson also plans to spend their senior year studying away at Columbia University. They hope to learn from faculty in the college’s creative writing program and get involved in New York City’s arts community.

With the Beinecke Scholarship, a $34,000 grant supporting graduate education in the arts, humanities and social sciences and given to only 16 students nationally each year, they are considering pursuing an M.F.A.

“An M.F.A. program would be more suited to my creative interests and skills,” says Carson. “I kept finding myself drawn to the creative aspects and wanting to work on my craft.”

Kim Catley is a freelance writer based in Richmond, Va. Photograph by Sabrine Brismeur ’22.

Art Across the Disciplines