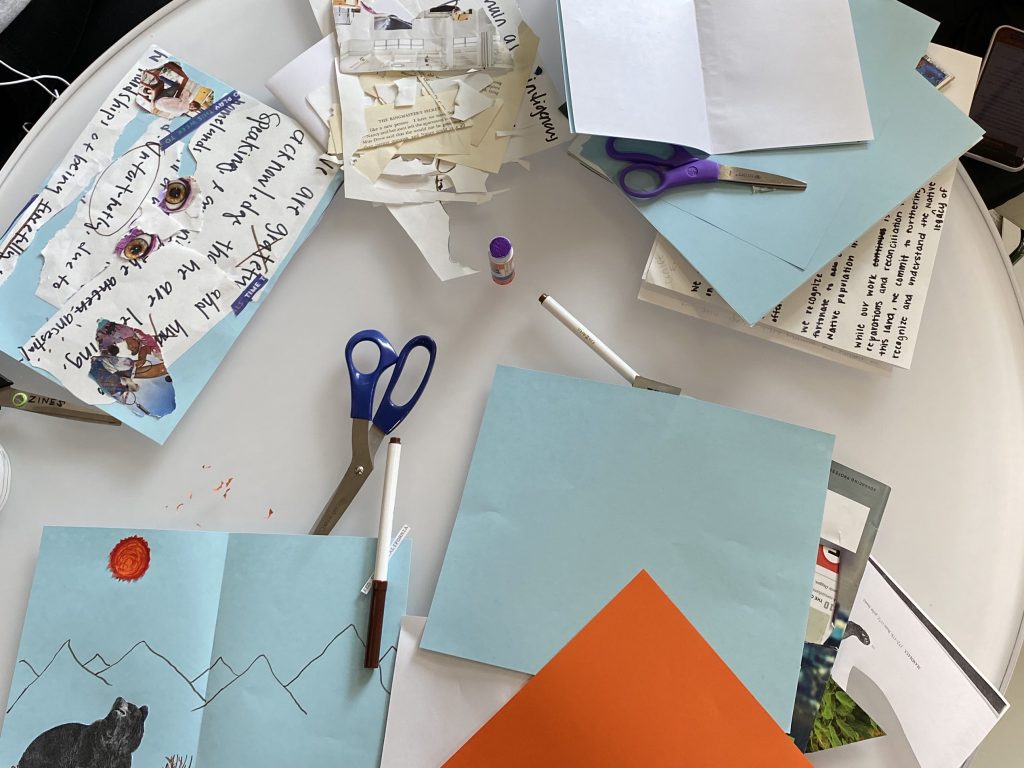 As an activist involved in sustainability and other campus movements, Coco Rhum ’24 is always looking for new ways to educate and engage people. For that reason, she’s exploring an interest in zines—self-published, small-circulation magazines that often provide a platform for voices that might not be heard otherwise.

With roots stretching back to abolitionist papers in the 1830s, zines gained ground as alternative media during the 1950s and 1960s. They’re typically printed through inexpensive means, like photocopying, but some modern zines are also distributed digitally. A zine can be produced as a single issue or as part of an ongoing series, and the structure can range from journalistic to literary to abstract.

“Zines have a long history of being countercultural publications,” Rhum says. “They allow for a certain freedom and subversiveness that doesn’t normally happen in the mainstream publishing industry.”

To learn more, Rhum enrolled in a DIY publications course, taught this past Winter Study by Hale Polebaum-Freeman, Williams reference and first-year outreach librarian, and Trevor Murphy, instructional technology specialist. During the four-week course, she learned about the history of power structures in publishing and about how technological and social movements have led to the proliferation of independent publications.

Students were also tasked with publishing two pieces independently, from developing content to printing to distribution. Rhum’s first project was an explanation of zines and their function as a political tool. Her second leveraged that utility to support her organizing efforts around divestment.

“It made that conversation accessible for students who might not know the logic behind divesting,” she says. “The plan is to have that now as a tool in our arsenal to help raise consciousness and mobilize people.”

Polebaum-Freeman says zines are a great mechanism for disseminating information, but they’re also helpful for “people who are discovering who they are in the world—which is everybody in higher education.”

Polebaum-Freeman came to Williams in 2018, and since then they have helped a growing number of faculty incorporate zines in their curriculum as an alternative to traditional academic papers and projects. Zine assignments are most often found in English and social science courses, Polebaum-Freeman says, since the grading of course assignments tends to be more subjective.

Bernie Rhie, chair and associate professor of English, incorporated a zine assignment in his fall 2019 course, Meditation and Modern American Life, which paired nine students with nine inmates at the Berkshire County Correctional Facility. Rhie says a student suggested a zine in lieu of a final paper as a way to collectively reflect on their experience in the class. All 18 students contributed artwork, instructions for meditating, personal essays and quotes that incorporated what they had learned. With help from the college’s Center for Learning in Action, Rhie printed enough copies for the students to share with their friends and family. (You can see the final result online.)

“Final papers can be very powerful, but they’re just for me,” Rhie says. “I think there’s something important about me not being the primary audience—that it was them sharing what they learned with others.”

April Merleaux, visiting assistant professor of environmental studies, has incorporated zines as both a shared class project and an optional final assignment. In her spring 2020 class Beyond Cli-Fi: Climate Histories and the Arts of Resilience, she asked students to produce a zine imagining the future as part of an exploration of climate change narratives.

Then, when the campus closed abruptly and students began remote classes at the start of the Covid-19 pandemic, Merleaux added a collective zine project documenting their experience during the lockdown through the lens of the apocalyptic narratives they were discussing in class. They used a shared Google Slides template provided by Polebaum-Freeman, which made it easy for the students to collaborate from a distance and gave everyone a sense of authorship over the final product.

Merleaux says zines can serve as a valuable bridge between academic writing and communicating with a broad public.

“That’s a core liberal arts college skill,” she says. “You learn to survey complex information, distill it effectively and use it to prompt conversation with people who don’t already have access to that information.”

One major turning point in the presence of zines on campus was the establishment of a circulating collection of them in Sawyer Library. The collection launched in 2019 after xenophobic, white supremacist and antisemitic pamphlets were disseminated in the library the previous year. In their proposal for the collection, Polebaum-Freeman and Anne Peale, special collections librarian, highlighted the ways that zines were similar in format to the pamphlets, yet they often seek to challenge power structures and affirm underrepresented voices.

With the help of one of the college’s Toward Inclusion Diversity and Equity grants, Williams Libraries purchased more than 300 zines directly from creators, the Boston Art Book Fair and independent distributors. To mark the collection’s launch and response to the pamphleting, Polebaum-Freeman says people were encouraged to “reclaim the stacks” by placing a photocopy of a zine inside a book in Sawyer Library, directing visitors to the new collection.

“Before the collection, there was interest in zine-making within the student community and the curriculum,” Polebaum-Freeman says. “But having a collection to support that and a physical space where students can go and read zines—it really lets you build a community around it.”

The collection has continued to grow, thanks to students and faculty. Zines from Rhum and other students in the DIY publications class can now be found in the collection, as well as those produced by Rhie and Merlaux’s classes. Others were donated by local and student publishers, outside of class assignments.

Beza Lulseged ’25 got the idea for her zine, February Feeling, in high school while spending a semester at the arts-centered Oxbow School in Napa, Calif. The zine explores the concept of young love—both platonic and romantic—through interviews with classmates, music and book reviews, submissions from followers, and a few of Lulseged’s own photographs.

She published the first issue in August 2020 and a second after graduating high school in 2021. She donated both to the Williams zine collection.

While she gained a following on Instagram, with some followers submitting their own work for consideration, Lulseged wasn’t sure she would continue the publication at Williams. But as she talked about her zine experience with her college classmates, she decided to revisit the series with a third, more literary, issue titled February Feeling: Love Letters, which she hopes to publish later this year.

Lulseged particularly enjoys her role as a curator, bringing in a spectrum of work from artists she doesn’t always know and creating a cohesive final product.

“I’ve grown a lot from having authority over my own work and actions, getting the chance to do this on my own time with no one holding me accountable,” she says. “And it’s been really cool to see how many people are brave enough to submit their own work. I’m so excited that I can give [artists] a space to experiment.”

Kim Catley is a freelance writer based in Richmond, Va. Photographs by Hale Polebaum-Freeman. 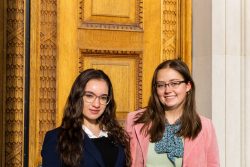